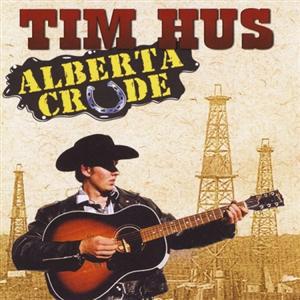 Tim’s second full length CD captures the essence of Alberta and the Rocky Mountain West. From rodeo cowboys to gold seekers and gun fighters, from oil riggers, vintage tractors, and wildfires to the Discovery Well – this is a tip of the hat to the centennial: 100 years of Alberta. Alberta Crude is distributed by Festival Distribution and is currently receiving airplay and very positive response throughout western Canada. NEWS: Click here view Tim Hus's first video of the song "Longest Stretch of Road".

In the early days when they first struck oil out on the Alberta plains
Turner Valley rush and the oil camp dust derricks on the foothills range
Oilmen sitting in a tarpaper shack talkin’ about makin’ it big
Holes in the ground and the pipe goin’ down drilling on a cable tool rig
Up to Calgary there’s oil in the air, light in the night from the burnin’ of the flares
Stocks are a sellin’ and the hammers ring this is gonna be the next big thing

The search for oil is a difficult thing fortunes made and lost
The pull is strong on a wildcat song Drayton Valley oil rig boss
Imperial oil they drilled and drilled and every single hole was dry
They pointed to spot on the map at Leduc and said “Give it just a one more try!”
The roulette wheel goes around and around six thousand feet down in the ground
The great oil age was about to begin the day that Leduc #1 came in

Bridge:
Black crude oil, it’ll pay the rent
Where they got all hell for a basement
The devil himself has a story to tell
About Redwater days or Pembina wells

There’s a downwind breeze from the refineries and the pipeline’s flowing fast
That’s the whole deal with the oil fields and the history of the oil patch
Thru the long hard years of dry hole drilling, heartbreak dreams and toil
The boom and the bust and the thrill and the rush and a billion barrels of oil
Where the iron rigs and the steel tools fought the battle for the fossil fuels
Badlands, tarsands, all of the rest: that is the story of the oil out West