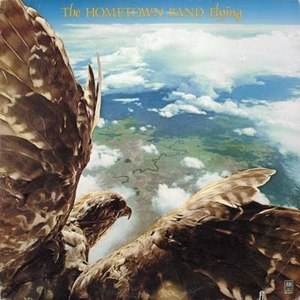 The Hometown Band began in 1975 as the group of session musicians backing legendary folk icon Valdy on a cross-Canada tour in support of his new album "Valdy and the Hometown Band". The band was: the album's producer Claire Lawrence on sax & flute; Shari Ulrich on lead vocals, violin, sax, flute & dulcimer; Geoff Eyre on drum & vocals; Doug Edwards on bass and the late and incomparably great Robbie King on piano and B3. The group recorded two albums in it's 3 short years and toured extensively across Canada and the US. This album was ground breaking in its 'out of the box' arrangements. It's hit "Flying" (written by Joe Mock of Shari's previous band, The Pied Pumkin) remains, after 3 decades, her signature song. Ulrich says: "This music was a remarkable and unforgettable chapter in all or our lives & careers and for many in our audiences.

Hailing from Vancouver, Canada, the Hometown Band only put out two albums. Both have just been released on CD, but they are only available for download at mocm.ca.

Flying: A slow, soft start, outstanding vocals from Shari, this track soars and swoons, should have been a smash hit, a brilliant pop song.5/5

Everbody Wants to Get to Heaven: Things slow back down again with this one, Male/Female vocals , simple beat with organ, a sprituial song. 4/5

Wingless Bird: Another beautiful slow number cool piano with bass and drums to start then organ comes in, another great pop song. 4/5

I'm Ready: A more uptempo track with a country pickin' intro, another cool sax solo as well as organ.4/5

Spread Em' All Around: The band really get to strutt their stuff on this 12 minute Jazz/Prog (with folky overtones) instrumental workout. Starts of at a quick pace, before slowing down for some nice Floydian organ noodling and then things slowly pick back up with the organ promonent in a funky/jazzy sort of way, then the guitar chimes in with some well echoed picking and we're flowing along nicely now, tapping the foot and really grooving, and we're only half way through. Slows back down now with some souful Saxaphone and other noodlings in support. then we start to funk out again with the sax really grooving with organ accompaning. Really going for it now with the sax dominating so well and then we'er back to the starting melodies to finish, Very Cool 4.5/5

Into the Night: Silky smooth, late night jazz feel to this finalk 11 minute track, then the awesome airy vocals of Shari start in before the tempo shifts up and takes us into the first Sax solo. Piano brings us back down ready for Shari to wow us again with her voice and then we soar off again into another solo for the sax, followed by a lovley piano peice and a flute solo. Very atomspheric track, so well done to pull this off so well.4.5/5

My over rating for this album 4.5/5, which is very impressive for an album I have only just discovered.
-Roddus