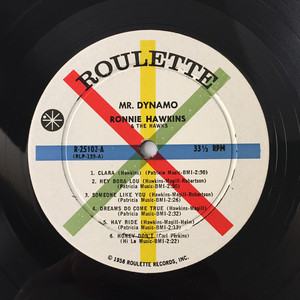 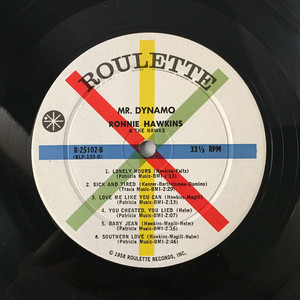 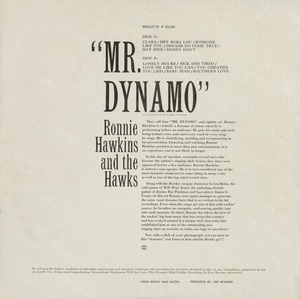 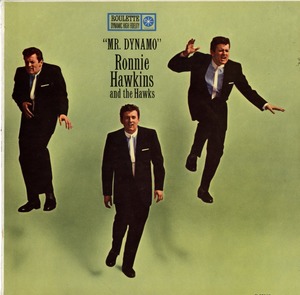 The Mr. Dynamo album, completed in early November 1959 and released in January 1960, marked Telecaster virtuoso Fred Carter's impressive recording debut as a Hawk. Alongside Robertson's songs (and version of Carl Perkins' "Honey Don't" and Fats Domino's "Sick and Tired"), there were four tracks co-authored by Levon Helm. Robbie was at this point not yet a member of the Hawks, but kept trying to convince Hawkins to take him into the band. The album was not very successful, falling into the limbo area between the demise of rockabilly and the dawn of teen-dream pop.

Levon Helm is on drums on Mr. Dynamo, the other musicians are Luke Paulman on rhythm guitar, Jimmy Evans on bass and Will "Pop" Jones on the keyboard.

Some of the song-writing credits on Mr. Dynamo are just a result of Roulette Records' ways of doing business in this period. E.g. the track "You Cheated (You Lied)" was actually written by Don Burch, and had been a US# 12 hit for The Shields in the fall of 1958. The songs "Hayride" and "Baby Jean" are probably Hawks compositions, though. They appear as slightly different takes on The Roulette Years, suggesting that they were originals that hadn't been finished yet, rather than covers adapted by the Hawks. Even if Ronnie Hawkins respected Robbie's songwriting skills enough to take him to the Brill Building later, Robertson may not have written the songs he was co-credited for on this album either.