Hawkins, Ronnie - Bo Didley b/w Who Do You Love 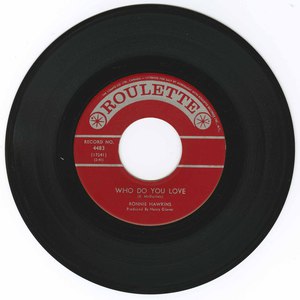 Ronnie Hawkins - Bo Didley b/w Who Do You Love 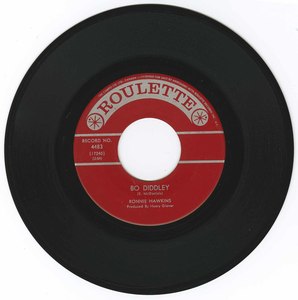 Bo Didley b/w Who Do You Love

The legend of Ronnie Hawkins: Some of the best tales about the rockabilly artist and bandleader
Brad Wheeler

Ronnie Hawkins, who died on Sunday at age 87, was a brash Southern rockabilly singer and bandleader, the architect of the Toronto Sound of the 1960s, and the hard-nosed nurturer of the Band and other Canadian rock artists of the era. But his greatest hits weren’t songs, they were his stories – some about him; some told by him.

His most famous quote has to do with hiring Robbie Robertson to play in his band, the Hawks. He told the 15-year-old phenom that he wouldn’t make much money, but that he would get more women than Frank Sinatra.

Hawkins didn’t use those words exactly – he had a colourful and rowdy way with language. The following are some of the best tales related to the Arkansas-born, long-time Ontario resident who went by the name Rompin’ Ronnie. And while they aren’t 100-per-cent verifiable, they are a part and parcel of his legend.

Paul Anka, bellhop?
Hawkins once played a show headlined by Paul Anka in Chicago. He and his band pulled up in a Cadillac with a trailer behind that had Ronnie Hawkins and the Hawks printed on the side of it. Drummer-singer Levon Helm was driving.

The young Diana-singing heartthrob was sitting outside the hotel wearing a T-shirt, a pair of blue jeans and tennis shoes. Hawkins leaned out of the car window, clicked his fingers and said, “Hey boy, come here.” Anka came over and said, ‘”Hi, what do you want?” Hawkins replied, “I want you to help carry this stuff in for us. Aren’t you the bellboy in this place?”

The pop star responded, “Don’t you recognize me? I’m Paul Anka.” To which Hawkins replied, “So what, I’m Ronnie Hawkins. Come over and grab these suitcases.”

Cocaine and the Last Waltz
Though the Band’s famous farewell concert took place way back in 1976 at the Winter Ballroom in San Francisco, they still talk about the backstage (and onstage) pharmaceuticals. “If there was anything wrong that night, it was that the cocaine wasn’t very good,” Robertson said in 2020. “It was wet and lumpy. I couldn’t indulge anyway, I had too much to be responsible for. I couldn’t mess around with trying to keep my head on straight.”

Hawkins had his own assessment of the white powder. “They paid $35,000 cash right in front of me for a little ole bit of cocaine,” he said in the 2019 documentary Once Were Brothers: Robbie Robertson and the Band. Hawkins sampled a line and told the other musicians that there was enough flour and sugar in the cocaine that they’d be “sneezing biscuits” for three months after they snorted it.

Partying with John Lennon and a prime minister
In December, 1969, John Lennon and Yoko Ono stayed with Hawkins at his home in Mississauga and took a train to see Prime Minister Pierre Trudeau. In a televised interview with George Stroumboulopoulos, Hawkins scandalously talked about illicit substances.

“The Prime Minister had his own stuff, I’m not kidding you,” Hawkins said. “And it was almost as good as John’s.” Stroumboulopoulos then asked Hawkins if got stoned with Trudeau. “Well,” he answered about the Prime Minister,” I don’t know if he did, but I certainly did.”

On God, hedonism and product endorsements
Speaking with Tom Hawthorn for The Globe and Mail in 1986, Hawkins recalled his hard-partying ways in the 1960s when he and the Hawks had a residency at Toronto’s Le Coq d’Or Tavern. A preacher approached him and asked him about the hedonism of the scene: “Ronnie Hawkins, don’t you believe in God?” Hawkins replied that while he believed in God “more than anybody else on this planet,” he was a little leery of the “ground crew.”

Hawkins then talked about product endorsements. “All the stuff I like, they won’t let me promote. Cognac. Du Mauriers. If it fit my image, it’d be brass knuckles and combat boots, but they don’t have any commercials for that.”
His first Rolls-Royce

In the 1960s, Hawkins decided to upgrade from Cadillacs. When he showed up at a Rolls-Royce dealership, the car salesman turned him away, assuming that such a rough-cut character couldn’t afford a luxury ride, then worth about $18,000. Undeterred, Hawkins went to the bank, got the money and put it in a paper bag. Returning to the car lot, he counted out the money, nice and slow, to the chagrined salesman.