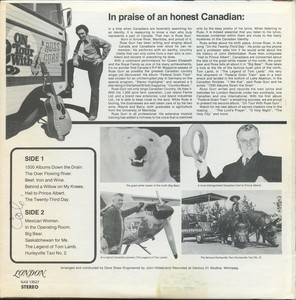 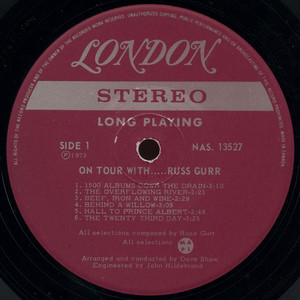 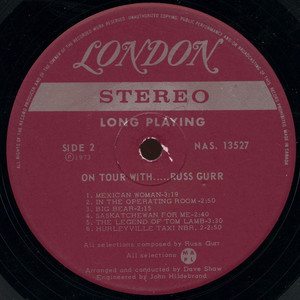 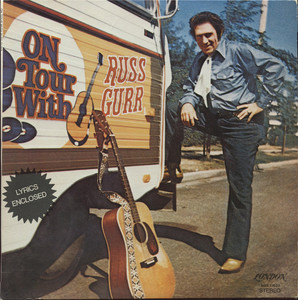 In a time when Canadians are feverishly searching for an identity, it is reassuring to know a man who truly represents a part of Canada. That man is Russ Gurr. Born in Arrow River, Manitoba, and proud of it, Russ Gurr has been writing and singing about Canada and Canadians ever since he can remember. He performs with an earth, country vitality that can only come from a man who is confident and sincere in everything he does. With a command performance for Queen Elizabeth and he Royal Family as one of his many achievements, it's no wonder that Canada's R.P.M Magazine speaks of Russ Gurr as possibly the greatest Canadian country singer yet discovered. His album, "Federal Grain Train" was chosen for an uninterrupted play in Germany on the special program, "Stereo Highlights" and received a 5 star rating in the famed British magazine, "Country Music." Russ Gurr not only sings Canadian Country, he lives it. With his 1500 acre farm operation, Lost Island Farms, Ltd., he is able to keep close to the land. While Russ is touring, the businesses are well taken care of by his two sons, Wayne and Barry, both graduates in agriculture from the University of Manitoba. Russ Gurr is all professional. His extensive musical training has added a richness to his voice that is matched only by the easy poetry of his lyrics. When listening to Russ, it is indeed essential that you listen to his lyrics, because contained within them are clues to the many mysteries of the Canadian identity. Russ writes about his birth place, Arrow River, in the song "On the Twenty-Third Day." He picks up the phone and professor asks him if he would write about the life history of John Diefenbaker. Russ then composes "Hail to Prince Albert." Canadians are concerned about the fate of the great white master of the north, the polar bear and Russ tells all about it in "Big Bear". Russ takes a look at the life of the famous bush pilot of the north, Tom Lamb, in "The Legend of Tom Lamb". His very first shipment of "Federal Grain Train" was in a train wreck and landed in the bottom of Lake Abamun, in the Canadian Rockies. "I like that", said Russ Gurr and he writes "1500 Albums Down the Drain." Russ Gurr writes and records his own lyrics and melodies for London Records under two contracts, one Canadian and one International. With his first album "Federal Grain Train" a smashing success, we are proud to present his second album, "On Tour With Russ Gurr." Watch for his new album of sacred classics now in the making... "The Lord's Prayer," "O Holy Night," "The Holy City" and more. (Arranged and conducted by Dave Shaw / Engineered by John Hildebrand / Recorded at Century 21 Studios, Winnipeg.)

Sometimes, without anyone knowing why, an obscure song captures the imagination of everyone. This is the story of Russ Gurr's "Federal Grain Train." Everytime he played it, everyone wanted to know where the record could be bought. Thus, album was born. Who is Russ Gurr? Born in the tiny town of Arrow River, Manitoba, Russ began singing at the age of 6. By the time he was 17, he had won his first major singing prize performing his own composition. Though a professional song writing and singing career beckoned, Russ chose the life of the land and began farming. At the same time, he established himself as a favourite entertainer at local events -- singing both classical and western favourites. Working on his 1500 acre grain farm just outside of Brandon, Russ often found himself composing and singing as he worked. His spare time was devoted to voice training and music studies. In 1967, he signed a contract with Federal Grain, and he's never looked back since. IN the past three years, Russ's popularity has spread like Western Wildfire. He's appeared at rodeos, fairs and celebrations all over Western Canada and everywhere he's gone, Russ has left them singing "The Federal Grain Train." Russ Gurr then, is the farmer next door, with a distinctive talent. And if you are an enthusiast of real toe-tapping, Twangy Western music, this album is sure to be a favourite. (Arranged and conducted by Dave Shaw / Produced and engineered by John Hildebrand / Recorded at Century 21 Studios / Distributed in Canada by London Records of Canada (1967) Ltd.)