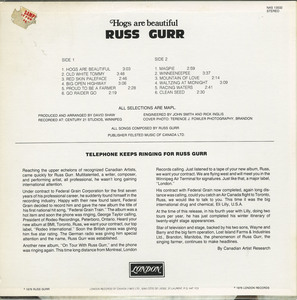 Russ Gurr - Hogs Are Beautiful BACK 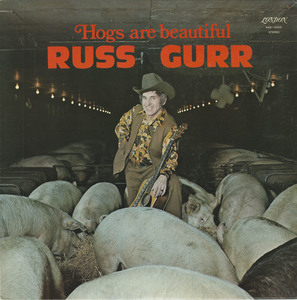 Russ Gurr, The Singing Farmer, hails from Arrow River, Manitoba and had a 1500 acre farm operation just outside Brandon, Manitoba. He recorded three albums in the 1970's. "Hogs are Beautiful" was his third album, released in 1976 on London NAS 13532. He also released "Federal Grain Train" on Rodeo RLP 7119 and "On Tour With Russ Gurr" on London NAS 13527 in 1973. R.P.M. magazine had hailed Russ Gurr as possibly the greatest Canadian country singer yet discovered. Russ Gurr sung Canadian patriotic songs about famous Canadians such as Sir John A. MacDonald, Marlene Jackson, John Diefenbaker, Louis Riel, and Tom Lamb. He sung of the Canadian prairies like Manitoba, Saskatchewan, Brandon, Dauphin, Prince Albert.

Under contract to Federal Grain Corporation for the first seven years of his professional career, he suddenly found himself in the recording industry. Happy with their new found talent, Federal Grain decided to record him and gave the new album the title of his first national hit song, "Federal Grain Train." The album was a hot item and soon the phone was ringing, George Taylor calling, President of Rodeo Recordings, Peterboro, Ontario. Heard your new album at BMI, Toronto, Russ, we want your contract, our top label, "Rodeo International." Soon the British press was giving him five star rating. The German radio was giving him special attention and the name, Russ Gurr was established.

Another new album, "On Tour With Russ Gurr," and the phone was ringing again. This time long distance from Montreal, London Records calling. Just listened to a tape of your new album, Russ, we want your contract. We are flying west and will meet you in the Winnipeg Air Terminal for signatures. Just like that, a major label, "London." His contract with Federal Grain now completed, again long distance was calling, would you catch an Air Canada flight to Toronto, Russ, we would like to talk to you. This time it was the big international drug and chemical, Eli Lilly, U.S.A. At the time of this release, in his fourth year with Lilly, doing two tours per year, he has just completed his winter itinerary of twenty-eight stage appearances.
Star of television and stage, backed by his two sons, Wayne and Barry and the big farm operation, Lost Island Farms & Industries Ltd., Brandon, Manitoba, the phenomenon of Russ Gurr, the singing farmer, continues to make headlines.

Recorded at Century 21 Studios in Winnipeg
cover photo was by Terence J. Fowler Photography, Brandon, Manitoba.
All songs were composed by Russ Gurr

We’re from the north with our tree-line and timber.
We’re from the land where the maidens are fair.
We wear the top hat the Prince wore in symbol.
We’ll match our boys with the best anywhere.

We’re from the banks of the great running waters,
Proud of a past that we’ve nourished with care.
We’ve hung our hats in those high ranking places,
We’ve occupied the Prime Minister’s chair.

Green’s for our youth, shining bright like an emerald.
White’s for a playground of fresh ice and snow.
Gold is the value of team-work and spirit.
Pride of the fans shouting Go Raiders Go.