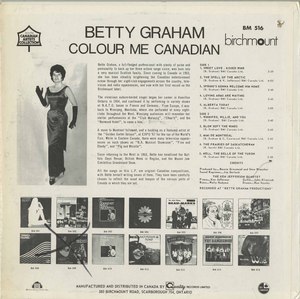 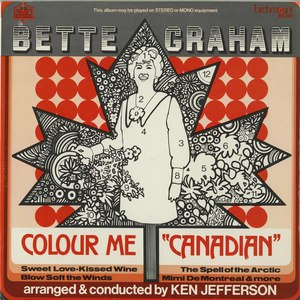 Bette Graham passed away in 1998, just shy of her 65th birthday.

It was the last of a four decade career as one of Canada’s top lounge singers. In honour of the woman he shared his life with, her husband Bernie Grinstead put together a CD compilation of his late wife’s finest recorded moments titled Sensational Bette Graham.

“She recorded two albums for CBC, two for Quality and one for London Records,” says Grinstead. “In that time, she played every major city across the country, including up to the dew line, but somehow missed Halifax. There wasn’t a major club or CBC or CTV talent show she didn’t do multiple appearances on.”

Graham even did a turn alongside Anne Murray on SCTV that still pays royalties. Grinstead makes sure of that. After finishing a career in the Canadian Air Force “fighting the Cold War” in 1970, the couple moved to Langley and he became a SOCAN music publisher handling artist’s royalties. The 82 year-old is still in the business, now working Graham’s disc to specific radio stations, news media and some retailers. He credits the couple’s frequent moves around the country as key to his late wife’s career success as it was “touring on the government payroll.” The two even spent time in France. Bette always got the premium gigs such as Expo ‘67, the Cave Supper Club and even performing in front of Pierre Trudeau once.

Sensational Bette Graham came about as something of a love letter from Grinstead in her memory to go along with her songs celebrating her homeland such as The Prairies of Saskatchewan, Mimi de Montreal, Alberta Today and Winnipeg Willie and You.

“Originally, I thought it was time to put together something of a tribute of her work for friends and family. The time seemed right because she was such a big artist at the time and it had been 15 years. Taking a few selections from her various labels — almost all are her originals — and a few covers like The Beatles’ Fool On The Hill and Hoagy Carmicheal’s Georgia On My Mind rounded it off. It was enough work that I figured why not print more copies.”

After settling up with the likes of Sir Paul McCartney to the tune of $41.50 and the Carmichael estate for the recording fees for the songs, he printed the CD run. Seventy copies went out across the country and the first response came from Vancouver CBC which posted it, a biography and links to the book Tone & Timbre discussing Graham on the broadcaster’s website. Then a Toronto affiliate started to play the album and phase two of her career began as five tracks from the album clocked in a few hundred plays to date.

“She was a really big star at the time, playing the best rooms in the country and even being named the best singer in the country by some media. I imagine there are people hearing these songs for the first time in a long time.”

When the album arrived at this outlet, it had become separated from its press release and I originally took it to be a very finely crafted homage to the past. From the audible ticks in the old vinyl grooves to the vintage strings and brass arrangements it was lovely. And there was that truly excellent voice and distinct and potent delivery shining throughout the 15 tracks. Grinstead had mastered the CD from vinyl to analog to digital with the help of some studio friends which explained the audio presence.

Once reunited with the explanation sheet, it was clear that Sensational Bette Graham was just that; an introduction to a very fine vocalist whose star had fallen off of the radar. She’s back now. Those interested in getting a copy of the CD can contact berniegrinstead@live.com.
Stuart Derdeyn, The Province