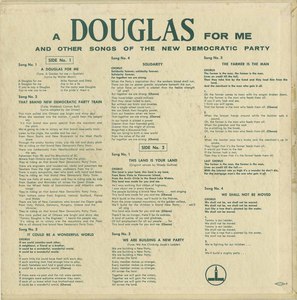 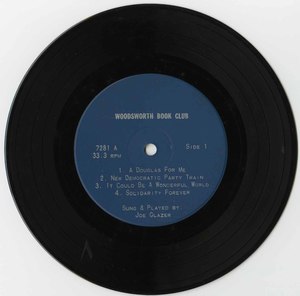 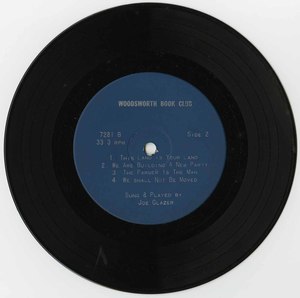 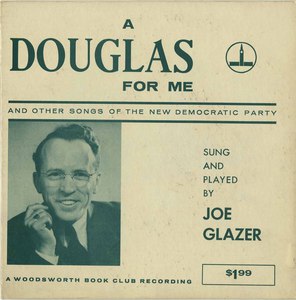 A Douglas For Me (picture sleeve)

Joe Glazer (June 19, 1918 – September 19, 2006), closely associated with labor unions and often referred to as the "labor's troubadour," was a US-American folk musicians who recorded more than thirty albums over the course of his career.

Born in New York City, Glazer was a graduate of Brooklyn College. He eventually moved to Akron, Ohio, where he performed for the United Rubber Workers throughout his career and also served as education director from 1950 to 1962. Glazer was also a member of the Textile Workers Union of America as well as an adviser to the United States Information Agency. According to his obituary in The Washington Post in 2006: "Mr. Glazer in 1961 joined the Foreign Service staff of the U.S. Information Agency, then headed by Edward R. Murrow, and was sent to Mexico as labor information officer. He transferred to the State Department in Washington as a labor adviser in 1965." His younger brother is sociologist Nathan Glazer.

Some of his more acclaimed songs include "The Mill Was Made of Marble," "Too Old To Work" and "Automaton." In 1960, in collaboration with Edith Fowke, Glazer published Songs of Work and Freedom, which included 10 of his original compositions. In 1979, Glazer invited 14 other labor musicians to the George Meany Center for Labor Studies in Silver Spring, Maryland, to share musical and written compositions, and to discuss the effective use of music, song, poetry and chants in labor activism. The three-day event became an annual one, becoming known as the Great Labor Arts Exchange (GLAE). Over the next five years, the concept of "labor culture" and how the labor movement and the arts interacted which Glazer and others held expanded. In 1984, Glazer incorporated the Labor Heritage Foundation as a parent body for GLAE as well as to curate and promote the culture of the American labor movement.

In 2002, Glazer released an autobiography entitled Labor's Troubadour, which was published by the University of Illinois Press. On September 19, 2006, it was disclosed that Glazer had died at the age of 88, reportedly due to the progression of non-Hodgkin's lymphoma, at his home in Silver Spring, Maryland.
-Wikipedia