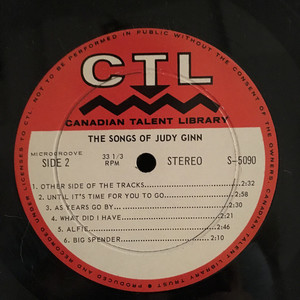 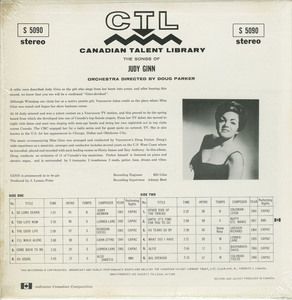 Judy Ginn - The Songs of Judy Ginn BACK 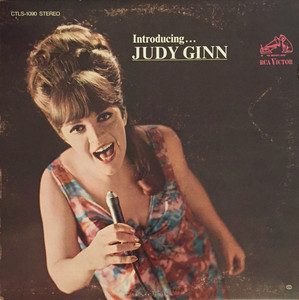 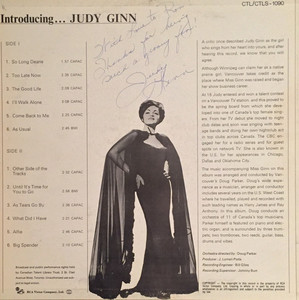 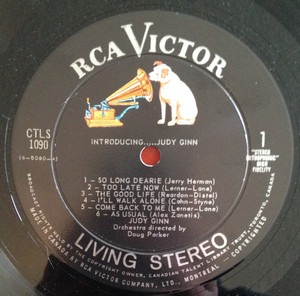 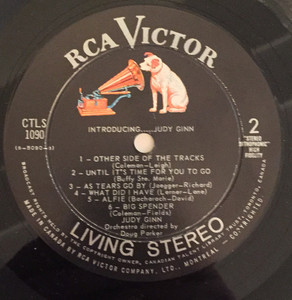 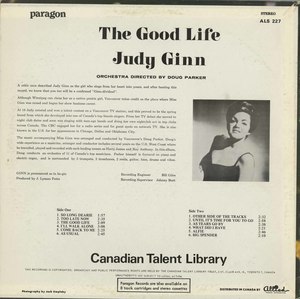 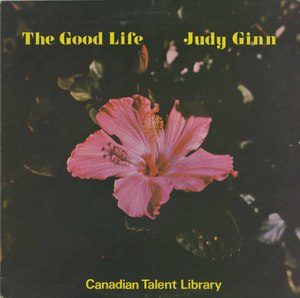 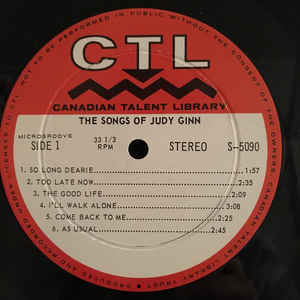 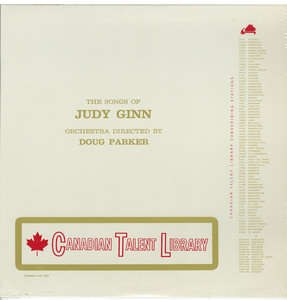 Born in 1945 in Winnipeg, Manitoba, Judy started traveling at the early age of four by moving to Vancouver in 1949.

At the age of seven, Judy commanded a presence that even adults many years her senior could not match. Judy made one of her first appearances on the Glenburn Dairy talent show on CKNW and was ‘discovered repeatedly’ captivating audiences at the renowned Kitsilano Showboat throughout 1952.

Still in her teens, the early 60’s found Judy hitting the airwaves on CBC Radio and Television in Vancouver and Toronto. Venturing out on her own in the late 60’s Judy started touring across Canada performing at many of the grand hotels and supper clubs under the name of Judy Ginn for ten years.

In 1969 Judy recorded her first album “Introducing Judy Ginn” for RCA and later Judy formed a duo with her brother Jim Walchuk, writing their own material and touring with a five-piece band throughout Canada performing in hotel lounges.

Always the consummate performers, Judy and Jim starred in their first CBC television series in 1971, a musical variety show titled…you guessed it… “Judy and Jim.” The end of 1971 saw the talented duo as guests on the Merv Griffin show and soothing audiences nightly in the playboy clubs of Los Angeles.

Her 2nd album released in 1972 titled “Jude” showcased all original material and was produced by Quality Records Canada.

Catching the travel bug again, the duo moved to London, England and worked the Playboy Club, did concert series in theatre, performed at Quaglino’s, the world famous Coventry theatre, appeared on BBC Television and Radio and also did stops in Bristol and Liverpool.

1976 had Judy returning to Canada and this was the duo’s year for television. They balanced a hectic schedule of playing the Cave Theatre Restaurant, guest appearances on The Tommy Hunter Show in Toronto, the Paul Horn show in Vancouver and their own nationally broadcast CBC series “The Judy and Jim Show” for 13 episodes.

Tropical waves beckoned in 1977 when the duo went on a journey to Hawaii to join the Don Ho Show at the International Marketplace with Jim in the band and Judy singing to a packed house. Performances at the Flamingo Hotel in Las Vegas that year were also to rave reviews.

The bright lights of Hollywood lured the duo back to Los Angeles in 1978 to do five performances on the Merv Griffin Show and entertaining at the Playboy Club all the while working as writers.

After 30 years of singing and performing, Judy stepped out of the spotlight in 1982 to open “Shady Business” in Venice Beach. She created custom-made lampshades for clients - many of those celebrities including Pam Dawber, Goldie Hawn, Bernadette Peters, Henry Mancini, Shelley Duval, Ashley Judd and John Ratzenburger to name a few.

In 1988 Judy came home to Vancouver to open Wally’s Folly on Dunbar and 41st - continuing to create illuminating shades and filling up her schedule by writing jingles and show tunes, poetry, doing studio work and voice-overs.

Jim was not far behind returning to Vancouver in 1989 and opened his own recording studio, W3 Sound, where he has been producing specialty scores for conferences, writing and producing commercials and producing CD’s for various artists around the world. Recently he has been busy co-writing the songs for the “In Full Bloom” show.

Moving over to an expansive complex on West Broadway where her beloved dog Suds and cherished kitty Pasha cohabitate, Judy has kept busy designing and making lampshades, showcasing her lamps in galleries and high end stores. In 1990 Judy and Jim produced the very first “How to make lampshades video” that received recognition in many high-profile trade magazines including Sew News and In Stitches. Her beautiful and meticulous home décor creations have been profiled in magazines such as Western Living, House and Home, People Magazine, and Style at Home, Mary Egelbreit’s Home Companion and Country Victorian Accents.

Bestowed as a third generation intuitive, Judy welcomes many clients weekly to learn about themselves through the medium of tea leaf reading and has become a psychic who is quite in demand in the lower mainland.

Her latest CD “In Full Bloom”, which was recorded live at a performance in 2000, is scheduled for release later in 2003. Her many fans in Vancouver, across Canada and around the world are thrilled that Judy is stepping back into the limelight to move and delight audiences through her powerful spirit and voice.