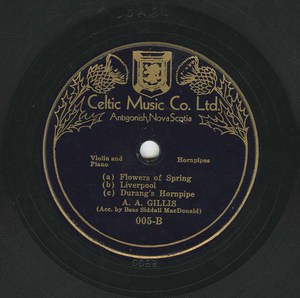 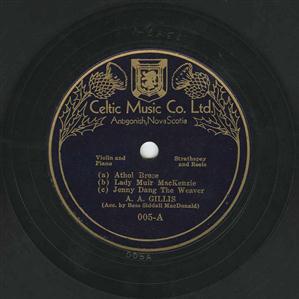 He worked hard on his dairy farm and also cut pulpwood (with an axe) during the day and then he would play the fiddle at dances until 1:00 AM. He was always a gentleman and was also supportive of the younger players unlike a lot of the old guys. He was a good family man with six daughters. He was an excellent fiddler and his bowing was admired greatly by the great Angus Chisholm and others. He was a recording pioneer making four 78 RPM records for Celtic in 1935, 3 solo and one duet with Dan J. Campbell.

These guys were local heros in the day before radio or records and it was a big thing when they expanded their audience with broadcasted performances.

You can see Angus Allan Gillis in action here at a Ceilidh in SW Margaree
http://www.videosurf.com/video/ceilidh-in-sw-margaree-9411527

Athol Brose is a drink made from oatmeal, honey and whisky. The music was composed by Abraham MacIntosh who published the Stratspey under the title "Buckingham House." Angus makes use of a Cape Breton style of “up-driven bow” to give the tune “character”. This style is not used too much today. He picks up the pace with Lady Muir MacKenzie aka General Stewart. These two tunes are often played together in Cape Breton for step dancing. Angus also uses the updriven bow & scotch snap giving the reel a strong beat.

Jenny Dang the Weaver is credited to Rev. Alexander Garden (1688 – 1778) observing his wife reprimand an impudent servant . A A Gillis was an excellent reel player as were a lot of dance fiddlers. He often played at Kenloch Hall usually with fiddlers Sandy MacLean or Dan J. Campbell.
-John W. MacDonald