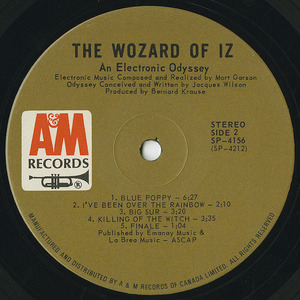 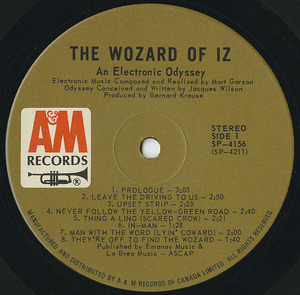 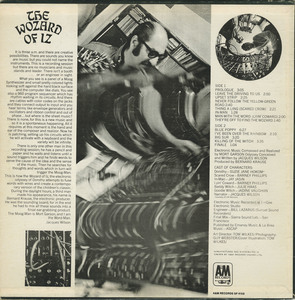 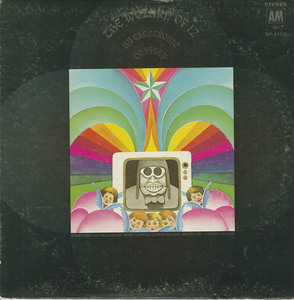 The Wozard of Iz: An Electronic Odyssey

The record begins over a kooky electronic score, while a male voice (with a deep Brooklyn accent) intones:

"This is the story of why Dorothy began her search for the Wonderful Wozard of Iz! Or somewhere... over... what rainbow? Our Dorothy... locked into one suburban acre of negative vibrations... boxed in with a pair of authority symbols; a hypnotized aunt, and a mesmerized uncle, who had turned life off... and turned the television set... on... and on ...AND ON!!!"

Then the music builds and builds as another voice commands Dorothy:
"Congratulations Dorothy, you're about to join the ranks of other famous teenage drop-outs... like Shirley Temple, Candy, and Tallulah Bankhead!"

...to which the voice of Dorothy makes it's first appearance and sexily coos:
"I'm out of the coffin... I'm out of the box... Kansas City isn't where it's at... it's a place where people throw rocks at dreams, and the dreams shouldn't be stoned... only the dreamer. I want to be in a place where I can see a stranger, and offer him a flower. I want that kind of power!"

And that's just in the first few minutes. The record goes on and on and on like that. Dorothy meets a bag lady "on a bus" who tries to hand her some pamphlets written by an army general from "Normalville" ... but Dorothy convinces the army general to "...trade his dog tags in for love beads..." and the lady on the bus eventually gets attacked by some "free press" pamphlets, and becomes The Wicked Old Witch in protest. Dorothy eventually decides to "...find the Great Wozard of Iz... because if I find out where the Woz was, I'd find out where it's at!" Then she gets advised by some more witches on busses to leave "Upset Strip" road in search of "the yellow green road" past the land of "surf and muscle tan" where she notes "...everyone has sunburned teeth from smiling so much." The scarecrow she eventually meets is an excessive consumer who buys too many American gas-guzzling cars and who has substituted "things" for "zing" and decides to follow Dorothy on her quest for the Wozard who can perhaps help him "think" instead of "thing." All the while, insanity-inducing electronic sounds bloop, swerve, echo and boom in the background. This LP is a (fractured) MASTERPIECE!

The rest of the album goes all over the place... using plenty of instruments and a whole chorus of vocalists. The songs sound like they could be in ANY musical... and it's a wonder that the production never made it anywhere past an LP recording. The voice of Dorothy is provided by sometime Lee Hazelwood vocalist/partner Suzie Jane Hokum. There are rumors that this woman is actually Nancy Sinatra (it certainly sounds like her)... but looking at some of the discussions about this album on the web... it looks like the verdict is still undecided as to whether it is her or not. It could be... or it may be just a vinyl compleatist nerd's urban legend.
-Mark Allen