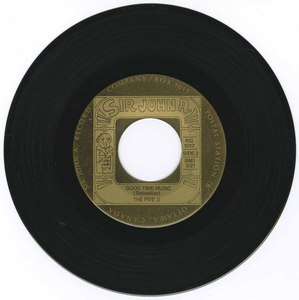 Named after Canada's first Prime Minister, Sir John A records was a label that existed for less than 2 years. Formed to celebrate Canada's centennial year in 1967 by local Ottawa personality John Pozer and musician/artist Ron Greene - the label tapped into some of the Ottawa area's hottest up and coming bands. The records issued on the label were very limited pressings of 100 - 500 quantities.

The Five D were, without a doubt, the jewel of the Sir John A. crown. Formed in late 1965, as The Fifth Dimension (they had to change their name on account of the U.S. outfit), they were one of the most popular acts in Ottawa. John Pozer was certain that he could turn them into a household name in Canada. They opened for Wilson Pickett, The Troggs, The Who, and even played on Parliament Hill before Queen Elizabeth II and Prince Phillip on Canada Day, 1967. Her Majesty later commented: "They are good, but loud!" The Five D relocated to Toronto in late 1967 to be closer to the centre of the Canadian music industry. During their career, they notched up 18,000 km touring across most of Ontario, also managing to star in the pilot series of CTV's new teen show for 1968, It's Happening. In spite of the great amount of success they enjoyed locally, they never achieved a nationwide hit. Their farewell concert took place at the Ottawa Civic Centre on July 18th, 1968. The original members have performed at several reunion concerts in Ottawa since the late 1980s.

This fast paced rockin' garage single was one of the last on the label. The B side is a cover of the Lovin' Spoonful/ Beau Brummel tune.