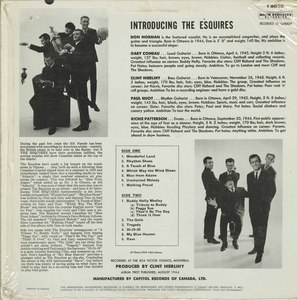 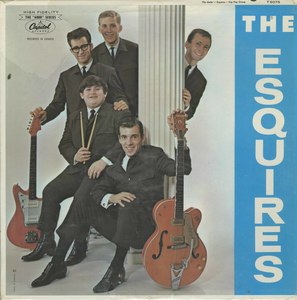 The Esquires were a Canadian band, based in Ottawa, active from 1962 to 1967. THE ESQUIRES' music represent The sixties sound of CLiff Richard and the Shadows and with a repertoire of songs recorded by such R&B greats as James Brown, Wilson PICKETT, Otis REDDING, the Four Tops, the Temptations, the Embers, Otis Day, Doug Clark and many others pop artists of the era.

The band was co-founded by guitarist Gary Comeau and bassist Clint Hierlihy, while both were still in high school. The band was rounded out with vocalist Bob Harrington, Paul Huot on guitars and drummer Bert Hurd. They played at various high school dances, local teen clubs and had their first show at the Rockcliffe Air Base Teen Club. After they joined the Musicians' Union in 1963, they were contracted weekend regulars at the Pineland Dance Pavillion.

Local writer Sandy Gardner raved about The Esquires in his music column for the Ottawa Journal. Word spread and they were asked to play a high profile gig in Montreal - the Dick Clark Caravan of Stars. The stars for this gig included Johnny Tillotson, Gene Pitney, The Shirelles and The Esquires backed up Andy Kim. Capitol Record representatives were in the audience and signed them up.

The band ended up going to Montreal again to record their first single, Atlantis which was a Shadows tune. The band then included Comeau, Hierlihy, second guitarist Paul Huot, diminutive drummer Richard Patterson, and when they did a vocal number, singer Bob Harrington. Richard had the big personality in the band and loved to talk. Gary and Richard remained life long friends and were in a couple more bands together, until Richard's death in 2011.

Being on Capitol Records meant more exposure for the group. As the British Invasion exploded in 1964, the group was a natural choice to open shows for the visiting superstar groups from England as well as the U.S. The band toured practically non stop in 1964 and opened for the Rolling Stones in Ottawa and Toronto, the Dave Clark Five, the Beach Boys Tour which included Glen Campbell and Roy Orbison. By then the band had a new lead singer, Don Norman. Don sounded like Cliff Richard and it turned into a vocal band with harmonies. That led to the group's biggest hit, So Many Other Boys.

The Album, Introducing The Esquires, was recorded in Montreal in 1964 at RCA Studios, produced by bass player Hierlihy and featuring several tracks written by the band.

One more single was released under Capitol Records in the spring of '65, but by that summer they switched to Columbia Records. Three singles were released under Columbia Records before the end of the year. But the band was beginning to feel the effects of a changing musical environment, and, along with outside projects and interests with the band members, shows started becoming fewer, and lacklustre efforts to try to push the band into the forefront caused their eventual split in the spring of 1967.

The Esquires opened the door for the rest of Canada's rock and pop groups with a series of firsts. The band won the first of what became known as the Juno Awards, as Best Vocal and Instrumental Group. They made the first-ever rock music videos in the country. And most significantly, by signing with Capitol Records in 1963, they became the first rock band in the country with a major label contract.

In 1987, the band reunited to commemorate its 25th anniversary, playing at a benefit concert for the Children's Hospital of Eastern Ontario. Appearing were Norman, Huot, Hierlihy, Comeau, Patterson, and Lewicki. The day was proclaimed by the City of Ottawa to be "Esquires Day", in the band's honour.