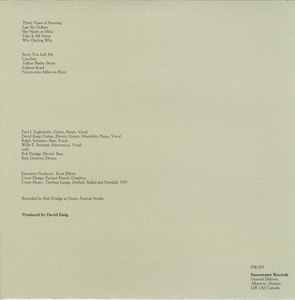 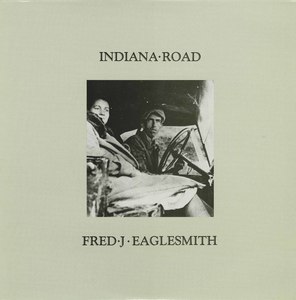 Fred (Frederick John) Eaglesmith (b Elgersma). Songwriter, guitarist, country-folk singer, b near Caistor Centre, Ont, 9 Jul 1957. One of nine children and raised in a religious home, Eaglesmith recalls his childhood as being in one of two places, either working the farm or driving to church. The regional radio stations influenced Eaglesmith's music and his lyrics are themed with blue-collar labourers, heartbreak and the rural lifestyle.

His first recording, Fred J. Eaglesmith, was released in 1980 followed by The Boy That Just Went Wrong (1983) and Indiana Road (1987). His next release, a double live collection titled There Ain't No Easy Road (1991), was a "boxed set" that was literally released as two cassettes packaged with a booklet in a homemade wooden box. Eaglesmith left Canada in 1992 and acquired a recording contract in Nashville, Tennessee, with the independent music publishing company Vertical Records, a division of Bluewater. Vertical Records was a turning point in his career, and the subsequent albums Things Is Changin' (1993) and the live album From the Paradise Motel (1994) were well received.

In 1996 Eaglesmith and The Flying Squirrels recorded Drive-in Movie which won a Juno Award for Best Roots & Traditional Album (1997). With more of a country attitude, Lipstick, Lies and Gasoline was released in 1997, and due in part to the constant touring, the album was successful in the US. In 1999 50-Odd Dollars was released and then in 2000 Eaglesmith established his own recording company - AML (A Major Label) Records - to produce his music and to support other musicians. AML Records' first release was the double-disc Ralph's Last Show, issued in 2001. After briefly returning to Sweetwater Music to produce Falling Stars and Broken Hearts (2002), AML Records produced Official Fred Eaglesmith Bootleg - Volume 1 (2003), Balin (2003), an acoustic album with the Flathead Noodlers, and in 2004 both Dusty and The Official Bootleg Series Vol. 2 - The Fred Eaglesmith Texas Weekend were released.

Constantly on the road, Eaglesmith has toured a dozen countries and enjoyed a loyal "underground" following in Canada. He has toured with Corb Lund, Bobby Watt, Ian Tamblyn, Joe Stacey, Merle Haggard, Delbert McClinton, Dwight Yoakam, Tammy Wynette and Linda McRae and has opened for the Cowboy Junkies, Willie Nelson and Cry Cry Cry. His songs have been recorded by artists such as the Cowboy Junkies, Chris Knight, Dar Williams, Kasey Chambers and James King. His music has been included in movies such as Viva Los Nowhere.

Eaglesmith is also known for his charitable endeavours, which included a contribution to Hobo Stew, a CD produced to benefit the restoration of the 1902 town hall in Waterford, Ont, and Oxfam's "Make Trade Fair" campaign to promote worldwide fair agricultural trade practices.
http://www.thecanadianencyclopedia.com/index.cfm?PgNm=TCE&Params=U1ARTU0004062