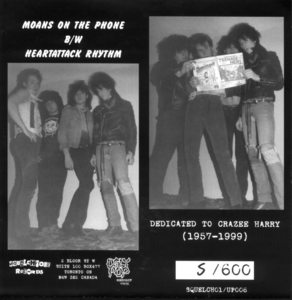 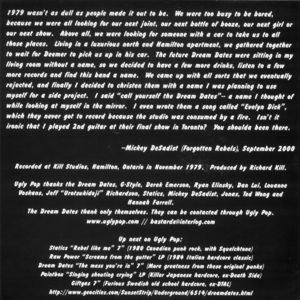 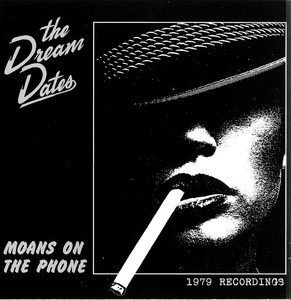 Coming out of the same extraordinarily fertile '70s Hamilton scene that brought us Teenage Head, Simply Saucer and the Forgotten Rebels, the band started out as Bored Youth, and made their 1979 live debut opening for Toronto's notorious Viletones. Soon changing their name to Dream Dates, the Hammer City combo went into the studio later that same year to lay down a seven song set that would remain ...unreleased for the next twenty-one years. Drawing on the rawest early rockabilly, snarling '60s garage punk and the furious sounds of more recent outfits like the Stooges and Dead Boys, Dream Dates backed three instant classic originals with four revved-up covers, then promptly forgot about the session as they proceeded to focus on their devastating live assault.

While the band gigged well and often until their 1982 disintegration, they never did enter the studio again, and our story might well have never progressed further were it not for a fortuitous conversation between frontman Fix and the Ugly Pop board of directors at the dawn of the next millennium. Aware that the multinational entertainment consortium had been pumping out platinum selling hit records by such global superstars as Rajoitus and They Live, Fix revealed at last the existence of the long-rumoured 1979 tapes. After some high-powered negotiations between the two parties' respective legal teams, a deal was inked and the first single (Moans on the Phone b/w Heart Attack Rhythm) was rushed out in December 2000 to satisfy the feverish holiday season demand of an impatient public.

Provocatively limited to a hand-numbered edition of only 600 copies, the entire run sold out in less than 14 seconds, with original copies now trading hands in the over-heated collectors' market for as much as a $10 Tim Hortons gift certificate and a signed Sherman Hemsley 8x10 glossy. Needless to say, untold legions of fanatical punk rock enthusiasts the world over were overjoyed when Ugly Pop unleashed the second 45 (The Mess You're In b/w Search and Destroy) early in 2004, this time packaged in an attractive red pocket sleeve and only slightly less limited to a mere 800 copies. The single once again sold out in less than a minute, leading a licensed European repackaging of both 45s on one 12" EP on Switzerland's swanky ZCM label. In the meantime, Fix teamed up with local Toronto neo-ska outfit Career Suicide to form Suicide Dates, a short-lived live project that played the classic Dream Dates songs, as well as a variety of '70s punk hits, for the infotainment of a new generation of local punkers.

Deification of the past is all well and good, but the future is NOW, baby, and NOW is the scene. While the Dates are long defunct, Fix has taken time out from fronting seminal contemporaries The Ugly to oversee release of Ugly Pop's third and final Dream Dates 45, Surfer Joe b/w Tallahassee Lassie. Overflowing with the sneering vocals, buzzsaw guitars and relentless energy of the first two singles, these two covers (Surfaris and Freddie Cannon) are culled from that same 1979 tape and maintain all the quality you've come to expect from one of the greatest punk rock bands ever to come out of this country. Available fall 2011!﻿