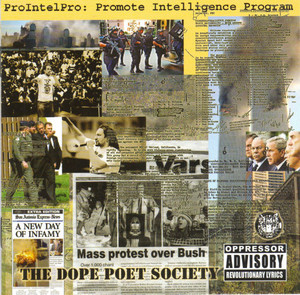 Over the course of ProIntelPro, Toronto-based the Dope Poet Society beat their anti-American, war on the war on terrorism propaganda message over your head 'til it hurts. For those who like their music revolutionary, DPS do little to start the fire but for real fans, it was always burning. As lyrical pacifists, the Dope Poet Society take their fight to the White House lawn with "War of Terrorism," "Amazing," and the "Bushit" remix, a scathing indictment of American foreign policy. Lyrically, Lavaman, Belladonna, Professor D and Sage reveal that America is to blame for many of the world's ills on "9/11 World Trade" and "ProIntelPro." Unfortunately, it's old hat, especially when in light of the more incendiary lyrics of Dead Prez, Chuck D or KRS-One. The production is average and finds stability in mellow, piano-driven underground beats lacking vigour. In the end, the patronising skits detract from nine well-intentioned songs that rehash worldwide anti-American sentiment.
-Pierre Hamilton, Exclaim, Apr 01, 2005

Never afraid to make targets of American presidents and Canadian prime ministers Dope Poet Society unleashes open warfare with beats that pop like cannon blasts and words that sting like poison arrows against anyone who stands for injustice and intolerance on ProIntelPro. On tracks such as "Bushit and "9/11 World Trade, attacks are open and accusations fly against the real terrorists in the world. Check "All of Us, a multi-lingual track that champions unity as the greatest weapon against oppression or "Amazing where Professor D unleashes a volley of criticism against MCs not saying anything. Taking influences from the granddaddies of militant hip-hop Public Enemy and KRS-One, Dope Poets Society lead the next charge against ignorance and greed. Combining positive lyrics based on positive social change with driving beats that scream revolution, ProIntelPro flows with militant chants and a touch of sly humour. With fists standing firmly in the air, Professor D, Belladonna and DJ Spinister have crafted a collection of stomping beats and spit-fire lyrics with a DIY ethic that is the soundtrack to your next political rally.
-Sergio Elmir, Exclaim, Apr 01, 2005

Canada's premier political rap group have yet to be silenced as Professor D and crew proved when they took to the stage opening for Public Enemy, who apparently asked specifically for these one-time PE-collaborators as local openers. While their set was hype, despite the poor sound system and late start, it really only peaked when local legend Maestro Fresh Wes joined them on stage to drop a solo a cappella and promote his pioneering rap career before getting busy rapping with the rest of the crew. They were the perfect start to a night that would experience more T.O. legends and political raps.
-Thomas Quinlan, Exclaim, Mar 22, 2007

Professor D, the leader of this group, has since changed his name to ProfessorD.us