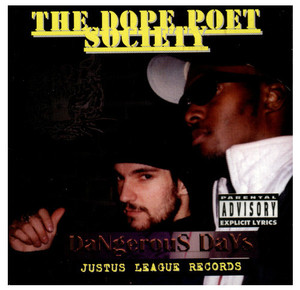 "These are Dangerous Days,
to say what you feel is to lay your own grave"
-Sinead O'connor, Black Boys on Mopeds

"From back in the day -I've been Def, and I said -that I was serious,
Now here it is, the Product of relentless perseverance!" rhymes D on One Of The Many, the opening song on Dangerous Days, the Ground breaking first album from the Dope Poet Society. At a time when a scarce amount of Canadian hip hop could be found in stores, and even more scarce were any full length releases, the group set themselves apart, and paved the way for many to follow by being one of the first Canadian Hip Hop groups to independently release an album. Though originally set to be released in late '95, legal complications held the album back for a year. Nonetheless, the album was destine to hit the streets and change Hip Hop in Toronto. Just musically, the album is dope. Wide ranging influences are drawn upon from soul and funk, to jazz to rock and even classical. Samples are cleverly worked in smooth yet unexpected ways, and are complemented with live instrumentation including bass guitar, drums and even live sax. This of course, is to say nothing of the incredible writing and rhyming that the album offers. With all the lyrics included in the five panel insert, you can try to keep up, as D skillfully rhymes across a variety of topics even more wide ranging than the innovative tracks that he so masterfully compliments. Many fans of the written word are quick to point out that many of these songs could simply be published as poetry and commentary. However, it takes an ear educated in the finer points of MC delivery to fully appreciate the highly advanced cadence and "syllabic magic" with which D transforms his written works into audio masterpieces.