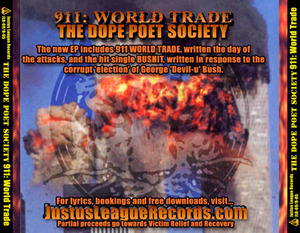 The EP contains four new tracks, and is available in select stores, or by mail order from Justus League Records. This is a historical CD, the first song released in the world to address the events of September 11th, but it definatly will not be the last. The title track was written on September 11, the day of the attacks, and has been causing a stir over the last week, having already been performed at several shows in Toronto, Kingston, and excerpts have been broadcast on several major networks. Below, you can read D's reaction and comments conncerning the attacks, as well as the lyrics to the song.

Chorus:
It might look like a movie but it's only truth (know the truth)
for the death and destruction there is no excuse
but the depth of corruption there is no dispute
it's well known that your chickens come home to roost

First thing in the morning, the ring was alarming
at first I heard it was a bombing, I tuned in and
got watching, I saw the second plane hit live and the
buildings falling, people wouldn't stop calling
it's all shocking, or so they claimed
every channel on the television showed the same
it looked like a war zone whole terrain
but why be surprised if you know about the whole account
of how the US goes about consolidating finance
country's luxury and money's based on centuries of violence
the character of arrogance Americans thinking
the terror is never here at home, -welcome to the Terrordome
... (cuts)
Amerikkka reaps the woes of the seeds it sows
innocents weep for those casualties of wars
Bush said 'Amerikkkas worst threat is terrorism' but the
trouble is the worlds greatest terrorist is the
Amerikkkan government...

They tell you 'bout the tower deaths and the Pentagon
but they never say how many they killed in Desert Storm
Men, women and children, the number was many more
but the deaths of civilians was something you never saw
Amerikkka causes massacres to happen across the planet
they manufacture the language of collateral damage
and add it to the package with cost benefit analysis
'cuz dead Iraqis mean lower cost gasoline
but the jokes on Bush, 'cuz when the towers blew up
the price of gasoline flew up!
some said Palestinians shouldn't cheer like that
yet, they probably clapped watching bombs over Baghdad
and the sad fact is though the world trade attack
was horrible, some parts of the world stay like that
you might cheer too, if near you stayed in hysteria
with weapons aimed at you they made in Amerikkka
(Chorus)

My verse states this earth's face's the worse place
a curse race since genesis the birth place
in the first place we ain't seeing the worst case
how this hurt place can be saved so earth pace
earth taste the revelation the church waits
first take earthquake earth sake and church break
the world trades, that ain't nothing there's worse flames
you reap what you sow, you need to first change

Up to their old tricks, The Dope Poet Society takes aim at another political figure. Just like the now classic, and ever relevant, 'F--k Mike Harris', the new song, 'Bushit', superbly analysis, critiques and kicks ass. Not the first anti-Bush hip-hop song, the chorus is composed of cuts from selected Bush critiques of the past. Of course, Ice Cube, Sister Souljah, and Paris (who released the controversial, 'Bushkilla', in which he assassinates the President), were referring to George Bush senior, but as DJ Spinister puts it, "Who can tell the difference anyway." The thunderous track, produced by Kayess, of Index Solutions, sounds like Jay-z/Memphis Bleak's, 'it's Alright', crossed with the furry and complexity of a bomb squad song. D's lyrics and delivery are as sharp as ever. At the cutting edge of both style and content, this MC continues to prove himself as a vigilant force of conscious hip hop. If ever an educator was a danger to the established power structure, this is what they sounded like.

So what'cha lookin' for, is it bush or gore?
The crooked war between these two is see through. So
What we need to do is take it back a bit
Ever since back when I've always been an advocate
Of castin' your ballot in, but now and then I fret,
thinkin' 'bout what Malcolm X said...
I'd rather have a straight up devil in power,
than cast any of our votes for wolfs in sheep's clothes.
That's a paraphrase, but in these very days the
Dilemma remains, dealin' with devilish candidates.
Elections are charades and we hate the game,
but you can't place the blame if you don't fight for change
It'll stay the same. So even though it's not fair,
You should vote but don't stop there.
The lesser of two evils is still evil however, evil is
bad, therefore the lesser is better, get it together. That's
what I used to believe in but I can't see no difference between' em
George Devil and Al Demon!

Chorus: George Bush is a terrorist (cut from Sister Souljah)

How in the fuck could anyone of us be dumb enough
To vote for bush, look jokin'? What are you smokin'?
He used to be the vice-president, then he became
president, now his son's the president?
Look man, just change the name Amerikkka to
Bush land, or maybe Bush Klux Klan.
You wanna vote for junior dessert storm? Or you
wanna hope for more and vote for Gore? But really,
what kinda hope is that wack laim,
tiring uninspiring campaign. Shit's a
damn shame, plus how could we conscientiously
vote for the spouse of one of hip hop's enemies?
You don't recall the silly war? The bitch is called
Tipper Gore, tried to ban lyrical literature.
With Bush as president, good heavens it's devilish,
But Gore's a puppet too, so what the fuck you gonna do?

So now in the aftermath, you have to laugh
What type of crap is that? The vote was almost split
half and half, reflectin' the saddest fact
the average man or woman couldn't tell the difference
between the crook and the crooked during the campaign
'cuz each man said the exact same thing.
Just like I said on Block'a'shot,
they're probably often golfing at the same country club.
But even so we know that the real through back
is Gore got most of the progressive votes.
So he lose and these groups get screwed,
Women, people of colour, poor people etcetera
And it's a matter'a non-proportional
winner take all mockery of democracy.
As y'all can see the popular majority
goes with Al but dude is the one who losses
due to this electoral college
proof U.S. elections are garbage
now of course you have the courts bounce
back and forth to re-count the votes
to see how it goes but then down the road
it'll reinforce what you already know
it don't make no difference to us
from the bottom up, the whole shit's corrupt