Diefenbaker, John - I am a Canadian 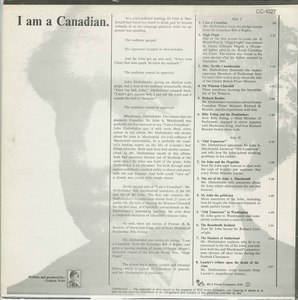 John Diefenbaker - I am a Canadian 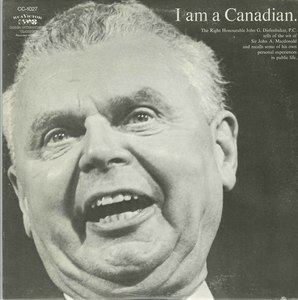 I am a Canadian

Canadian Conservative Party Leader John Diefenbaker tells stories of the wit of Sir John A. McDonald and his own personal experience in office.

Side 1:
1. I am a Canadian: Mr. Diefenbaker reads the pledge excerpt from the Canadian Bill of Rights.

2. High Flight: One of the best poems to come out of World War II, "High Flight" was written by James Gillespie Magee, a 19-year-old fighter pilot in the Royal Canadian Air Force. The sonnet was found in his tunic pocket after his fighter crashed in December, 1941.

3. Mrs. Neville Chamberlain: Mr. Diefenbaker illustrates the respect opposing Members of Parliament have for each other with a story about the wife of the former British Prime Minister.

5. Richard Bonfire: Mr. Diefenbaker reminisces about former Canadian Prime Minister Richard B. Bennett, and his experiences with him.

6. Billy Esling and the Doukhobors: How Billy Esling, a blind Member of Parliament, engaged in clever repartee with Mackenzie King. And how Richard Bennett bested them both.

2. Sir John and the Hopefuls: How Sir John used humour to deal with the rush of hopeful job aspirants that every Prime Minister knows

3. The wit of Sir John A. Macdonald: Mr. Diefenbaker tells anecdotes about Sir John which demonstrate his wit and humour

4. Sir John the politician: More anecdotes of Sir John, including how he taught the Governor-General to speak perfect Greek

7. The Duchess of Sutherland: Mr. Diefenbaker explains why he is so interested in the life of Sir John, and tells how both his and Macdonald's ancestors were thrown off their farms during the Scottish Clearances

At a joint political meeting, Sir John A. Macdonald had taken too much to drink and he became violently ill on the campaign platform while his opponent was speaking.

His opponent stopped in mid-sentence.

And Sir John got up and said, "Every time I hear that man speak, he turns my stomach."

The audience roared its approval.

John Diefenbaker, during an election campaign, had a man in the audience sarcastically shout, "Give 'em hell, John!"

Diefenbaker snapped back, "I don't give anyone hell, I just tell the truth and it sounds like hell to the Grits!"

The audience roared its approval.

Both men have had similar careers. (And, as Mr. Diefenbaker recalls in this album, both had ancestors thrown out of Scotland at the same time.) Sir John was fond of the grape. John Diefenbaker is an abstainer. Yet both through their careers exhibited a marked ability to thrust and parry with wit and humour. And both could "turn on" a crowd, any crowd, with simple charm.

As well, there are stories of Premier R. B. Bennett, of Mackenzie King, and of blind Member of Parliament Billy Esling. Mr. Diefenbaker also recites his pledge, "I am a Canadian" from the Canadian Bill of Rights, and gives a moving reading of James Gillespie Magee's immortal sonnet of the Second World War, "High Flight".

The album has a newsy, candid and informal feeling, which is typical of Canadians in general, and Mr. Diefenbaker in particular.