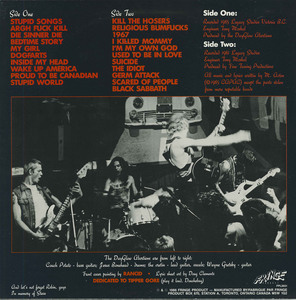 Dayglo Abortions-Feed Us a Fetus BACK 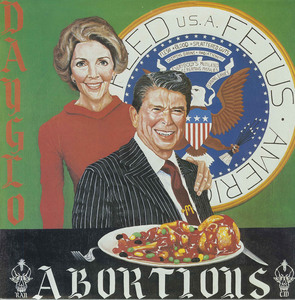 Dayglo Abortions released an incredible debut called Out of the Womb in 1981. However, four years later when Fringe announced plans to reissue it, the Dayglos decided to record ten new compositions, throw as much as possible of Out of the Womb onto the b-side, and release it as a whole new album! If you own Feed Us A Foetus, all you're missing from that first LP are the adorable Ramonesy "I Wanna Be an East Indian" (now available on God Records' CD reissue of Feed Us A Foetus), the atypical but awesome psych/sludge rocker "Too Stoned to Care," and a brief collection of snores, beeps and feedback called "P.E.T."

So this is it. The classic. Straight punk, all 20+ tracks utilizing the same exact "boom-chick" drumbeat and generally the same tempo too, stylistic variety represented only by a few '70s-style hard rock intros and a couple of funny ripoffs (example: they recreate the guitar solo from "Whole Lotta Love" note-for-note in the middle of "Stupid World," for no clear reason at all!).

I have always loved this album to pieces. To this day, I still consider the catchy riffs, fuzzy guitar tones, high energy, phlegmy scum-of-the-earth vocals and uproariously sick lyrics to comprise one of the absolute highlights of the punk genre. And sure, it may seem like overkill to put two gross dog jokes right next to each other (one about fucking a dog and the other about a dog that farts until it explodes), but (A) the songs are both catchy beyond belief - just TRY getting them out of your head! and (A part 2) that's what the Dayglos were and ARE about. Excess. Repulsive excess. Pushing the limits of bad taste with such riff-tastic classics as "I Killed Mommy," a Ramones-style singalong featuring the verse, "My daddy was a bitch/Screwed around with my dog and cat/My mommy satisfied her thirst/With a bag of urine." Hee! But they're not ALL about straight blech, I suppose. How about "Argh Fuck Kill," whose verse consists of the words "Blah blah blah blah!" repeated over and over again with the sort of tonal expression that one would use when creating actual sentences? Heck, there's even lots of political commentary on here between the twisted vomitous humor.

And upbeat? Ho, is it upbeat! Headbang express for punk jivers! So that's my soapbox. If you like the Ramones and that sort of straightahead catchy chord sequence high-speed punk, you gotta get this album. Even WITHOUT the funniness, these melodies are too catchy to miss out on.

Interestingly, Christianity and alcohol probably would have been fine with him, even though they're essentially interchangeable with the two hobbies he feared most. Goddamned Christian cultist freaks. When will they ever learn that The Bible was written in 1952 by Dr. Seuss as a hilarious inside joke?