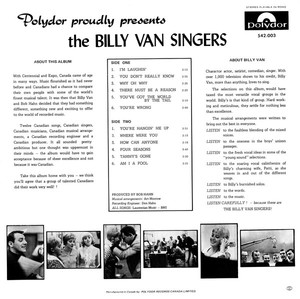 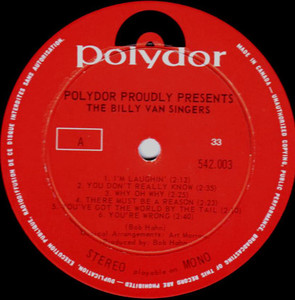 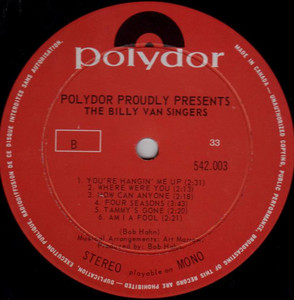 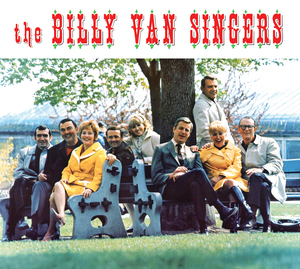 He was born William Van Evera in Toronto, Canada in 1934. He showed show business talent as a teenager when he and his four brothers formed a singing act that toured North America. His first on screen performance was as a performer on the CBC program Nightcap. In the early days of his career he also fronted the group "The Billy Van Four" and recorded at least one album as a member of the group "The Billy Van Singers".

During his early years Billy Van honed his craft for comedy. In 1971, his comedic talent was showcased on a children’s series called The Hilarious House of Frightenstein. In Canada, it is certainly the show that he is best known for, not only because he played almost every character on the show, but mainly due to the sheer genius of his comedy. The show was meant for children, but the humour undoubtedly appealed to adults, especially when Van was seen to adlib, often inserting his own topical jokes and asides into the dialogue. Remarkably, one season of 130 episodes of the show was produced in the span of about 9 months in a studio in Hamilton, Ontario.

Later he found his best success as a guest performer in sketches on variety shows such as The Sonny & Cher Comedy Hour, The Ray Stevens Show and The Bobby Vinton Show. He was making a name for himself on mainstream US television, but working in Los Angeles did not appeal to him and he returned to Toronto. There he found work in shows like Party Game, Bizarre, and The Hudson Brothers Razzle Dazzle Show.

In 1998, after he underwent triple heart bypass, Billy went into semi-retirement and only continued to do voice-over work for commercials and animated programs.

In 2002, Billy Van was diagnosed with cancer. He fought the disease for a year before he passed away at Toronto's Sunnybrook Hospital on 6 Jan 2003. He is survived by his wife Susan and his four children.

Billy Van's picture appears on the Canadian Comedy Wall of Fame at the CBC broadcast centre in Toronto. However, to this day (2006), he does not have a star on “Canada’s Walk of Fame”.

I don't have much information about the inspiringly-named Mr. Common to pass along. About all I can tell you is that he made regular appearances on CBC television's Country Hoedown and his own short-lived show, Tommy Common's It's A Musical World, throughout the '60's and '70's., and released at least two LPs on RCA-Camden, Tommy Common Sings and Tommy Common Sings Country Classics (seen below). The liner notes:

"Tommy Common is one of the best known male vocalists in Canada today, and although he has divided his time almost equally between C & W and Pop, in this album he returns to his first love, Country and Western Music. From among the hundreds of great Country and Western tunes which he has performed on television, radio and in LIVE appearances from coast to coast in Canada and in fact every corner of this rapidly shrinking world, he has selected what he considers to be the ten all-time great Country Classics.

Most of these selections are closely identified with one or more of the great Country and Western stars, but in this brand new release, Tommy gives the "Common Touch" in the hope that you will enjoy his unique and distinctive interpretation. In so doing, he pays tribute to some of the immortal stars of Country Music and brings together for the first time his personal selection of all-time great Country and Western Classics."

While claiming that Common's version is a "unique and distinctive interpretation" is a bit of a stretch, he does bring a certain infectious enthusiasm to the tune, and benefits from the instrumental backing of RCA-Camden's (annonymous) studio musicians, who lay down a rock-solid foundation of finger-pickin' and steel guitar.

VAN, Billy
Born: William Allan Van Evera on August 11, 1934 in Toronto, Ontario
Died: January 8, 2003 in Toronto, Ontario
Billy Van began singing when he was young with his four brothers. They toured North America as a vocal group called the Van Evera Brothers. Van eventually left the group, dropped his surname and became Billy Van. He formed his own Billy Van Four (and later the Billy Van Singers) appearing regularly on CBC television including the show Fancy Free. The group had one charting single called “I Miss You” that reached No.29 on the CHUM Chart in March 1961. Van would begin a run as host of CBC show Nightcap in 1963 (which ran until 1967) as well as a spin-off mini-series called Flemingdon Park. He also starred in a series of U.S. beer commercial for Colt 45 right through the 1970s. CHCH-TV in Hamilton hired him for two popular projects including a starring role as multiple characters on The Hilarious House of Frightenstein in 1971 and through most of the 1970s as part of a team that including Jack Duffy and Dinah Christie on the much-loved charades show The Party Game. Billy Van was also a regular performer on The Ray Stevens Show, Ken Berry’s Wow Show, The Sonny & Cher Comedy Hour, The Bobby Vinton Show, John Byner’s Bizarre, and the Toronto production of The Hudson Brothers Razzle Dazzle Show. In 1982, he co-hosted TVO’s children’s computer science show Bits And Bytes (and its 1991 run called Bits And Bytes 2).Van also narrated the animated science program Eureka! Billy Van released his autobiography, ‘Second Banana,’ in 1997 and survived triple heart bypass surgery in 1998. Unfortunately, he was diagnosed with esophageal cancer in 2001 and succumbed to the disease in 2003.

with THE BILLY VAN FOUR with THE JOHN COWELL QUARTET
1961 I Miss You/ The Last Sunrise (Rodeo International) RO.274