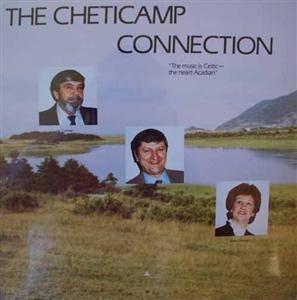 The Cheticamp Connection was an Acadian celtic band that released two excellent albums in the mid 80’s; this one was their first, released in 1983.

Cheticamp Connection were Joe Cormier, Edmond Boudreau, and Ethel Cormier. All three are direct descendants of the 12 families who founded Chéticamp, Cape Breton between 1780 and 1785.

From the back of the album jacket: “In this album they have taken their inspirations from the great Cape Breton fiddlers – their own contemporaries. They were particularly inspired by Angus Chisolm and Winston Fitzgerald who straddled and dominated both generations; also by the late Dan R. MacDonald, the great musician-composer. Finally, they introduced the waltz “Ashton Rose” to their Nova Scotia and American fans in tribut to it’s composer Leo Browne of Ottawa for his lifetime contribution to the survival and growth of traditional fiddling. Above all, the album is a salute to Chéticamp, the music-loving village. Its sons and daughters do not forget.”

Cheticamp is a wonderful village. If you can survive the fierce wind (Chéticamp is famous for it’s strong winds called suêtes, a phenomenon that occurs in only two places in the world, Chéticamp and Wreck House, Newfoundland.), you can end up with a lovely piece of carpet of the world famous hookers of Chéticamp. (The making of wool or rag rugs on burlap).

The album was recorded in Ottawa. The album photography was by Olive and Lionel Brasseur. Producer: McKenney Talent Agency.
-Robert Williston