Canning, Brendan - Something For All Of Us 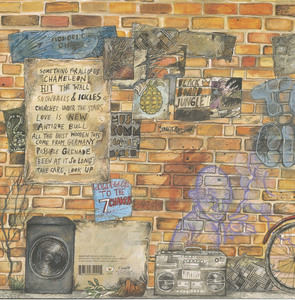 Brendan Canning-Something For All Of Us BACK 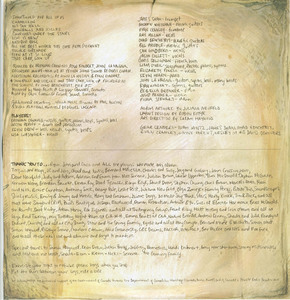 Brendan Canning-Something For All Of Us INSERT SIDE 01 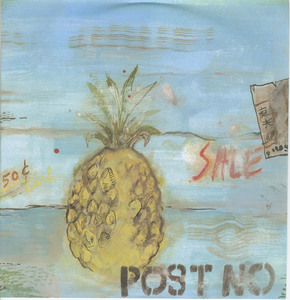 Brendan Canning-Something For All Of Us INSERT SIDE 02 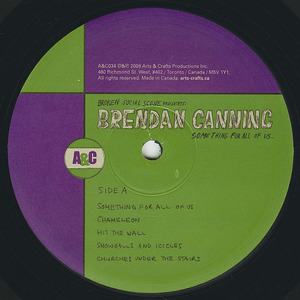 Brendan Canning-Something For All Of Us LABEL 01 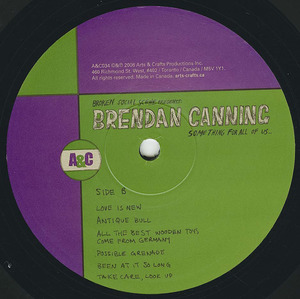 Brendan Canning-Something For All Of Us LABEL 02 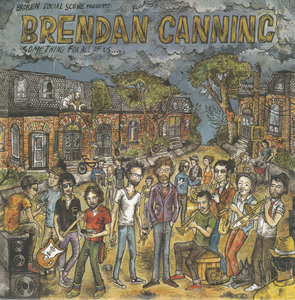 Something For All Of Us

Ironically titled Something For All Of Us, Canning's solo debut was the first time the furry-faced Broken Social Scenester stepped up to the plate after playing second fiddle to frontmen like Kevin Drew and Jose Contreras for so many years. And what do you know? He had it in him all along to make a kick-ass album of his own. And what a kick ass album! Beautifully alternating between the ambient music of Canning's DJ work and KC Accidental and the noisy indie rock BSS squeezed out of influences like Sonic Youth and Dinosaur Jr., it really was something great. "Churches Under Stairs" is where it's at, but I've heard "Love Is Knew" is hilarious live.

Chock full of woozy sing-alongs and pulsing ballads, Brendan Canning's debut solo album suggests he's just as responsible for Broken Social Scene's life-affirming guitar pop as Kevin Drew.
As the chief songwriter and vocalist for Broken Social Scene, it seemed reasonable to expect Kevin Drew's solo debut, Spirit If..., to sound quite a bit like a BSS record. The first volume of Arts & Craft's Broken Social Scene Presents series, Spirit If... even flaunted its affiliations and similarities. Bassist Brendan Canning's record, Something for All of Us, seemed a surer bet to follow the trend set by the side projects of Andrew Whiteman (Apostle of Hustle) and Jason Collett: elaborating on themes and sounds given secondary status on BSS albums. Instead Something, chock-full of woozy sing-alongs and pulsing ballads, suggests that Canning is just as responsible for BSS's life-affirming guitar pop as Drew.

Maybe it shouldn't be a surprise-- Canning, with Drew, was a founding member of BSS. But even playing in a band that sits dead-center in the underground rock sound spectrum, splitting the difference between pop/rock, noise/tunes, jam/punk, Canning seems like the median. After toiling for the mostly forgotten By Divine Right, he had his spotlight-turn on You Forgot It In People's "Stars and Sons". Since then, he has seemed content to work quietly as the band's melodic gut, counting out orbital, song-serving basslines. Canning-- curly locks, rimmed glasses, professorly beard-- even looks the part of MOR rock daddy. But you can hear Canning on Something; hear his clockwork eighth-notes on the can't-stand-still post-rock of "All the Best Wooden Toys Come from Germany"; hear his propulsive under-thrum during bangers like "Hit the Wall" and "Possible Grenade"; hear him even as Something credits Drew and BSS drummer Justin Peroff (as well BSS contributor Lisa Lobsinger, on vocals) as major contributors.

Something is a Broken Social Scene Presents release, and the group does do a good job showing off and helping along Canning: from the cover, which cartoonishly features Drew, Peroff, and Whiteman, among others, to the familiar, rippling horn of James Shaw or Drew's buddying up on the choruses, his recognizable pipes mixed graciously low. Drew, a more unique singer and stronger writer than Canning, was also more likely to lapse into bullshit poetry or break out J Mascis as indie bling. Canning doesn't strut or preen nearly as well, but he is patient, good-natured, and seemingly in love with slip'n'slide guitar rave-ups.

Something is far from exact in its arrangements and structure; where Galaxie 500 smoothed over many of the distinguishing points of the Velvet Underground, Canning takes his six-string terrycloth and spreads around any number of mid-1990s guitar rockers. "Churches Under the Stairs" is the simplest brand of alt-rock-- throbbing bass, lots of tom hits, and two guitars splashing in a kiddie-pool of distortion. Lobsinger's honeyed exhalations turn the rolling piano chords of "Antique Bull" into a fulfillingy forgettable Breeders song. "Chameleon" morphs a little, sure, but you'll know exactly where it is at all times, a lilting drone followed by martial percussion and tentative trumpets before the tempo picks up and the group chorus-- inevitable from the very first moments-- gets its fingers deep into some of that feel good: "You/ You can throw your arms up/ You/ You can be at ease/ Stick to things that remind you/ Of where you used to be." There's little risk-taking, but Canning is more than capable of the high-pitched acoustic balladeering of "Snowballs and Icicles" or the red-eared, last dance crawl of "Been at It So Long".

Something succeeds because Canning knows his strengths, or perhaps because his strengths aren't particularly volatile (see Drew, Kevin), but when he tries to carve out too ripe a melody-- the repeated choruses of "You bet your life boy" on the title track grow stale-- he sounds a bit out of his league. There's little defense for the blockheaded funk-rock of "Love Is New" which wonders-- for four full minutes-- what Girls Against Boys might've sounded like sober. Mostly, Something lives up to its everyman title by removing the truly heart-pounding moments of a BSS record and replacing them with a sense of community, easy friendship, and a kickass guitar pedal collection.
-Andrew Gaerig, pitchfork, July 18, 2008