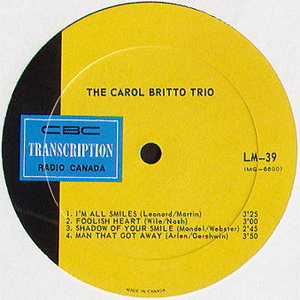 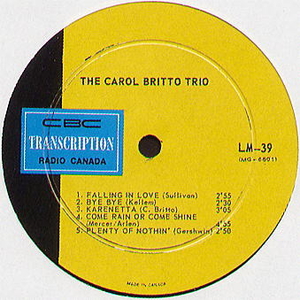 ​Carol Britto was born in Cleveland but Toronto was her artistic home. The polished jazz pianist was a singular presence on the Toronto jazz club scene for some 27 years. She found various gigs around town from playing at Lyte’s, an intimate jazz cabaret at the Royal York Hotel but she made her mark leading the Carol Britto Trio, the house band at George’s Bourbon Street backing veteran jazz stars from the deeply soulful saxophonist Eddy “Lockjaw” Davis to the swinging Milt Jackson.

“Man, she can wear you out,” Joe Venuti once told me. Venuti was possibly the most aggressive jazz viloinist of his day and Britto was his match, “No matter what tempo,” he added. Britto solos were “potential juggernauts,” noted New York Times critic John S. Wilson said after her return to the Big Apple in the early ’80s, where she played an A List of clubs such as Hanratty’s and the Village Corner. Her playing also had its intricate, intellectual side with its many “interesting harmonic structures,” as saxophonist/composer Benny Carter recognized.

Other musicians might give testimony to her culinary skills, but she seemingly maintained a sharp distinction between her home life and her jazz life. Married to the fine bassist Bill Britto, she had a close family with children and grandchildren. Yet she never seemed more private than when she was at her most public on-stage. Engaged but aloof was her preferred style.

Chet Baker liked that about her: the aloof part. “We connect in some way I can’t explain,” the troubled trumpeter told me early one Sunday morning in a hotel restaurant after a night when he may not have known sleep. I suspect it was the case of one deeply private person understanding the same thing in someone else. Perhaps this explains the title of Alone Together, the album she recorded with Flip Phillips and Michael Moore, or the naming of Inner Voices, also recorded with Moore.

Music was Carol's life. School concerts led to a scholarship to the Cleveland Institute of Music. Cleveland jazz lovers may remember her playing at the Purple Tree Lounge in the Manger Hotel. From there she began to make a name for herself in New York and in Toronto where she studied with the incomparable Oscar Peterson. "Oscar taught me how to be a take-charge pianist," she said. Her forceful energetic technique was often compared to Oscar's musical energy and style.
​
Carol was famous as a solo performer and as leader of the Carol Britto Trio. During her career, she accompanied legendary names in jazz including Chet Baker, Benny Carter, Helen Humes, Joe Williams, Major Holley, Zoot Sims, Phoebe Snow, Joe Venuti, Doc Cheatham, Marvin Stamm, Roy Eldridge, Flip Phillips, Bobby Rosengarden, Eddie "Lockjaw" Davis, Gary Mazzaroppi, Milt Jackson, Lance Hayward, Tootsie Bean, and Michael Moore. She played with Percy Faith and his Orchestra and she also toured with the Tommy Dorsey Band.

Trumpet player Marvin Stamm said of her, "If a visiting jazzman wants a powerful yet sensitive musical companion at the piano, nobody in the business can equal her." Tenor saxophonist Eddie "Lockjaw" Davis called her "Lady Britto, the Countess Basie of the piano." The great jazz violinist Joe Venuti called her simply, "Mother Jazz."

In New York, Carol played all the major clubs: The Knickerbocker, The Fortune Garden Pavilion, The Village Corner, Birdland, Café Gianluca, J's, Zinno, Carnegie Tavern, Hanratty's and the Rainbow Room. Britto's albums won her a wider audience and acclaim with "Alone Together" with Flip Phillips. Her album "Inner Voices" with Michael Moore, was also recorded on the Town Crier label.

Carol had many interests. She was a gourmet chef who loved cooking for friends. She was an avid reader. She was expert at working crossword puzzles. But it was to her music that she gave her heart and soul.