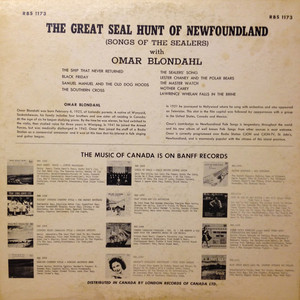 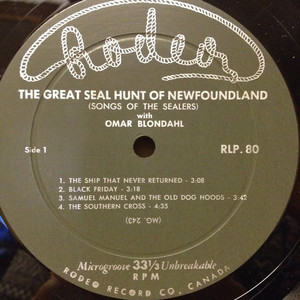 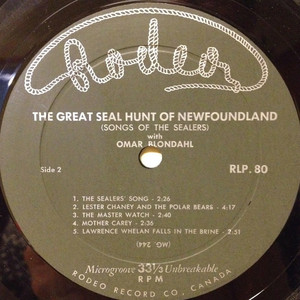 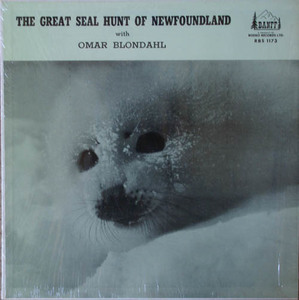 The Great Seal Hunt of Newfoundland

Whether the front cover makes your mouth water for a can of seal meat, or makes you desire cuddly hugs and kisses, the songs and recitations heard on this album are as rich in Newfoundland and Canadian cultural folklore as any other album.

Omar Blondahl, aka Sagebrush Sam, was born in Wynyard, Saskatchewan on February 6, 1923 to parents who were from Reykjavik, Iceland. He had four brothers and one sister. When he was six years old, he began to play and study piano. When he was eleven, he moved onto the violin. His family moved to Winnipeg, Manitoba and it was there that Omar studied singing and music theory for six years under various teachers including Roberto Wood and Charles Mihlo. In 1941 he enlisted with the Canadian Armed Forces. He was medically discharged in 1942. In 1951, Omar joined the staff of a Radio Station as a commercial announcer. It was during this period that he became interested in folk music and guitar playing.

He then journeyed to Hollywood where he sang with orchestras and appeared on Television for two years. In 1955, Omar moved to Newfoundland where he devoted all of his attention to the traditional folk culture of Newfoundland. No other non-Newfoundlander contributed more to Newfoundland culture and folklore than Omar Blondahl.

Ryan's Fancy were a band that Newfoundland inherited from Ireland. They were one of Newfoundland's best and most popular bands for a decade. They started out as Sullivan's Gypsies and Sons of Erin and released a total of 24 albums between those three bands, singing traditional Irish music.

Ken Peacock, born in Toronto, worked at the museum of civilization in the 1950's and focused on Newfoundland folk music in those years. He released "Songs and Ballads of Newfoundland" on Folkways FG 3505 in 1956. Some of his field recordings were released on Pigeon Inlet's "Songs of the Newfoundland Outports" in 1984. Several of his recordings are held by the Canadian Museum of Civilization.

Omar Blondahl, as legend would have it, stumbled upon St. John's on a trip to Iceland, fell in love with the place, found a job on a local radio station, then went onto record 17 folk traditional albums in the 1960's and 70's and became the first full time performer/folklorist to specialize in Newfoundland Folk Music and made an extraordinary and legendary contribution to Newfoundland ballads, songs, and folklore.

On this album, Omar sings songs and recites stories of the Newfoundland Sealer. Sealing has been a way of life in Newfoundland long before the steroid fed over-crowded chicken mcnugget coups and corn-fed beef taco farms were developed in the West to help feed mankind. There's nothing like a can of seal meat in the mornin'.

A Few Obvservations on Newfoundland, her People and their Music by Omar Blondahl:

"It would take a great deal more than a confederation to change the people of Newfoundland, for they are a race unto themselves. They are justly proud of their hardy forebears' pioneering spirit, for Newfoundland was Britain's first colony. The rugged coastline, the thousands upon thousands of virgin acres, the lakes and forests, the winding rivers and their mighty rapids, the wild sea, these are the heritage of the Newfoundlander.

One could hardly say that Newfoundland is removed from the world's pathways, and yet the people of this island have managed to remain sufficiently individualistic to be truly considered "different". They are a warm-hearted, simple-living people, and I have yet to meet a Newfoundlander, be he a lumberjack, a miner, a fisherman, be he rich or poor, who has not a friendly greeting and a warm handshake for any stranger.

Perhaps you will agree that these observations are reflected in the folk-songs you'll hear as you play this recording, for the songs I have included here are the songs of the people of Newfoundland. God bless them, I'm glad they haven't changed: visiting Newfoundland has been one of the most refreshing experiences of my life."

Omar Blondahl died in Vancouver, British Columbia in December, 1993 at the age of 70.
-Robert Williston