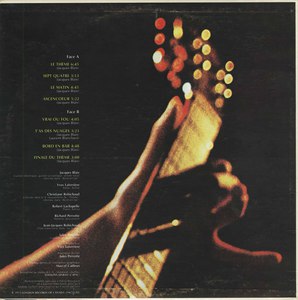 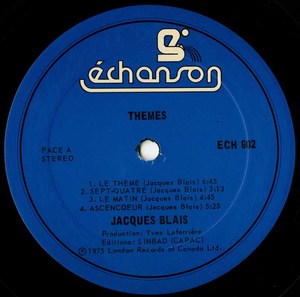 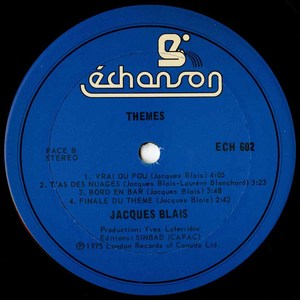 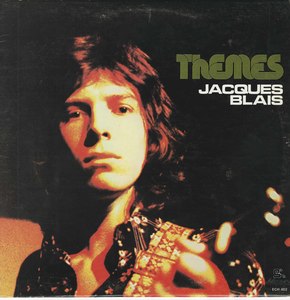 The first album from singer/songwriter Jacques Blais, entitled "Thèmes", finds him backed up almost entirely by former members of Contraction. These include Yves Laferrière (bass), Christiane Robichaud (vocals on two cuts), Robert Lachapelle (piano/synth), and Richard Perrotte (drums). Their influence is all over the music. Nonetheless, all writing credits are given to Blais, who plays acoustic and electric guitar in addition to singing. Roughly half the cuts are instrumental, and it is these that shine in particular through their gorgeous melodies and arrangements, rather than outright virtuosity. Blais' electric playing is emotive and bluesy, with some hard rock riffage and the odd throwback to the psychedelic era. Fans of Contraction will surely appreciate this album. In fact, although the album was released in 1975, one wonders if it wasn't recorded around the same time as Contraction's "La Bourse ou la Vie". (http://www.progquebec.com/index.html)

Self-taught guitarist that played a few years on the local Quebec scene in various line-ups, , sharing stages with Octobre, Maneige, etc. Jacques Blais became one of Quebec's best guitarists (along with Frank Marino) and his reputation grew to the point of playing prestigious shows without having recorded an album (yet). Late 74, despite having his own and upon hearing Contraction's second album La Bourse Ou La vie, he asked the group's bassist Yves Laferrière to produce his first album, and soon enough most of the band was backing Blais, not only in the studio, but in the next few months' following its release in 75. With an ordinary picture as artwork, Blais' Thèmes album became a favourite and even gained some local award as "experimental album of the year", but rest assured, there is nothing experimental about this great funky jazz-rock album, where Contraction leaves an indelible paw on it, despite all tracks being written by Blais himself.

Musically besides being a worthy Contraction album, Blais' wonderful and warm guitar virtuoso and autodidact style is plenty more reason to fall under the spell of Thèmes, which appears to be a musical thematic album Starting on Robichaud's inimitable vocals, the "Theme" is a lovely quiet intro, moving on to a mid-tempoed piece where Blais' guitar takes the listener by the emotions soaring in the sky, before the closing section returns with Christiane's heavenly vocalizing. Sept Quatre is a 7/4 piece that was quite popular on the radio airwaves and features wordless vocals ala Wishbone Ash in Argus, but Contraction is blasting away, while Blais is now reaching the stratosphere. Le Matin is a Blais-sung track (accompanied by Chrstiane's brother on flute), but Blais' voice is certainly not his main feature. Ascencoeur (a clever pun associating elevator and heart) is a slow developing crescendoing piece dominated by Blais guitar, ending the first side and contrasting heavily with the flipside opener.

Indeed Vrai Ou Fou (true or crazy) is a schizophrenic piece contrasting between an evil guitar riff and more atmospheric moments, but in the end, the guitar histrionics win easily, Blais putting in a brilliant performance, although pushed to the limit by Contraction. T'as Des Nuages (you have clouds, but bunch of clouds if you remove the apostrophe) is another Blais-sung track, but neither outstanding, nor standing out Bord En Bar sees the discreet return of Christiane Robichaud, but the track is a Hendrixian guitar fest, while the closing Thèmes is a reprise of the middle section of the opening track.

After parting company with Contraction in July that year, the second part of 75 will see Blais enjoying major local success, sharing Festival stages with Offenbach, Aut'chose, Conventum and Michel Madore. By mid-76, Blais had formed a new duo called Fantasia, improvising very popular gigs, before performing for Mick Jagger's birthday (in Montreal to see the Olympics). Fantasia will grow, including members of Eclipse, Pollen and Pouls and will eventually release in 77 an album called Jacques Blais & Fantasia, produced by Harmonium's Michel Normandeau, but this is another story. In the meantime, Themes is an extremely fine album, one that was almost forgotten, but the fantastic duo of ProgQuebec just unearthed this gem. http://www.progarchives.com/album.asp?id=20872