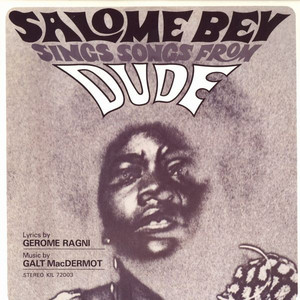 A new show written by Gerome Ragni with music by Galt MacDermot (they also did "Hair") is scheduled to open in New York in September 1972. It is the story of a young man's run-in with evil, what it does to him, and how he handles it. This record of Salome Bey singing twelve of the songs from Dude is being released ahead of the original cast album because we love her interpretations -- and time waits for no man.