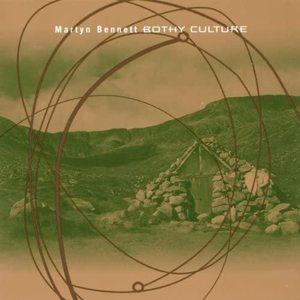 Bothy Culture is a celebration of my culture. It is also a celebration of two other cultures that have really spoken to me through their music even though I did not know much or any of their language. The music of Islam has long been a fascination for me - how could it be that the modes, vocal and instrumentalism be so similar in emotion to Gaelic styles? And how is it that the music of Scandinavia could have the same solitary sweetness and heavy-beat rowdiness of the ceilidh music I had grown up playing?

The answer is simple for me, because we, as mankind, have always had ways of saying what we feel without the need for words. If you strive to be a musical alchemist then you can discover the true message in all peoples through the sounds they make. I had understood these 'foreign languages' as soon as I heard them. I recognised them to be some past life I had lived through perhaps, or they seemed to well up under my fingers without my awareness. On a cautionary note: the unfortunate term "World Music" has given rise to many so called alchemists whom I believe do not actually understand the music they borrow and unfortunately they tend to tout their works as being authentic with no upbringing in any tradition what so ever.

Go to my links page for artists that have given me inspiration.

"There is a dichotomy in this music, a gentle old tradition of the land and the sea against the neon technology of our growing Urban culture. The tunes are of an old style: Scottish, Irish, Swedish even Islamic. The beats and mixes are of a new style: Garage Breakbeat, Trippy, Hip, Drum and Bass. I hope when you listen or dance to these tunes you get a sense of your own roots. If you push back the pressure of Urban development for a second you might remember where you came from. Go climb a mountain and see."
Many people ask what "Bothy" means. A bothy, in the Highlands at least, is a small stone built shelter constructed on Drovers routes, which criss-cross the most remote parts of Scotland. Now you ask what is a "Drover" ?. Well, a Drover is a shepherd, of sorts, that drives cattle and sheep from outlying rural areas to the bigger market towns. This almost always involved a lengthy and, often, treacherous route over high, mountain passes. It is on these passes that bothies can be found, and although it is generally more than a century since any Drovers have used them they are still maintained by the estates in order to give stalkers and hill-walkers some refuge.

Obviously, being a man of the mountains myself, I have spent many happy weeks trekking from one bothy to another across some of the most breathtaking scenery in Scotland. I've also met some great characters along the way and played many a wild tune to a bottle of Lagavullin (or something else if I was lucky). I should add that bothies have no electricity, heating, baths, sinks, or running water and in the winter time can be pretty grim places if there is no fire-wood to be found.

Of course, most of the time God's grace leads you to that piece of dead wood, and in no time a cold, forbidding night can be transformed into a blazing, cosy, room that smells of smoke and coffee. It has to be one of my favourite things.

Folklore and traditions attached to the life of the Drovers, "na drobhairean" as they are known in Gaelic, or "Bothy Lads" as they were known in the North East has survived well and I even knew a couple of old shepherds (two hardy, radge bastards by the way - now sadly deceased) who had hundreds of bothy songs and tunes that were composed over generations. Of course, you can see the same types of tradition and way of life in many mountainous regions of the world - Spain has a bothy (refugio) tradition as does Scandinavia, Austria, Bulgaria, Greece and Turkey, China etc.

Finally, I would say that in some ways bothies have the same, familiar atmosphere to urban nightclubs - arriving for the sound-check when they are merely cold, empty shells is always a spooky experience. Perhaps the same spirits of so many fire/spot-lit, whisky/drug charged nights have somehow imparted a memory of the ghosts of those people you have never met and can only imagine. Although the music and songs that have been played in them are totally contrasting it is this same sense of excitement that can transform four bare walls into a chamber of sheer sensual delight.