Baker, Dave - A Portrait of the Westcoast in Song 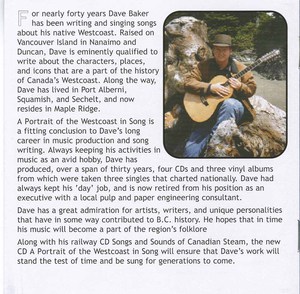 Dave Baker - A Portrait of the West Coast in Song 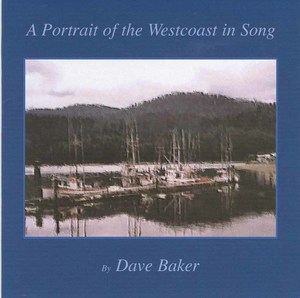 Take a look at this album. No one before has accomplished such a feat as telling the history of the Westcoast in song in such a exciting and thrilling way. Stories in song about Emily Carr, ships and trains and a small touch of the First Nation's history. You wont' want to miss adding this timeless album to your collection.

For nearly forty years Dave Baker has been writing and singing songs about his native Westcoast. Raised on Vancouver Island in Nanaimo and Duncan, Dave is eminently qualified to write about the characters, places, and icons that are a part of the history of Canada’s Westcoast. Along the way, Dave has lived in Port Alberni, Squamish, and Sechelt, and now resides in Maple Ridge.

A "Portrait of the Westcoast in Song" is a fitting conclusion to Dave’s long career in music production and song writing. Always keeping his activities in music as an avid hobby, Dave has produced, over a span of thirty years, four CDs and three vinyl albums from which were taken three singles that charted nationally. Dave had always kept his ‘day’ job, and is now retired from his position as an executive with a local pulp and paper engineering consultant.

Dave has a great admiration for artists, writers, and unique personalities that have in some way contributed to B.C. history. He hopes that in time his music will become a part of the region’s folklore Along with his railway album Songs and Sounds of Canadian Steam, the new album a "Portrait of the Westcoast in Song" will ensure that Dave’s work will stand the test of time and be sung for generations to come.