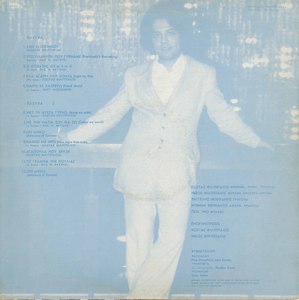 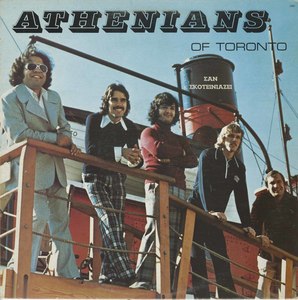 The Athenians of Toronto were a Greek band from Toronto, Ontario who gave away and sold a few copies of this album, San Skoteiniazei, which was recorded on their own private label, The Athenian Record Company. It's probably the best Canadian cover tune album of all-time - certainly my favourite! Definitely the best non-Anglo-Franco album recorded by Canadians in Canada. The album features three originals as well as four Chicago covers; also covers of Santana, The Doors, Lighthouse, and Credence Clearwater Revival.

All of the songs are in Greek, except Light My Fire which switches over to English half-way through. The Athenians of Toronto were Denny Fernando on guitar and vocals; Vangelis Bethanis on vocals; Paul Imo on bass; Nikos Philippeos on drums; and Costa Philippeos on keyboards and vocals. I don’t believe any of these Greeks went on to record anything else, but the band was joined by a few more famous Canadian jazz musicians on horns, Pete Schoefield, John Satcho, Al Stanwyck, Heather Banks, and Terry Anton.

The Musicianship on this album is flawless and the album is highly original. It is the best Greek recording ever made in Canada and there are probably less than 100 surviving copies. Greece could pay off it's debt if they sold a few copies. Pull out this album at your next Greek wedding and dance the night away!
-Robert Williston