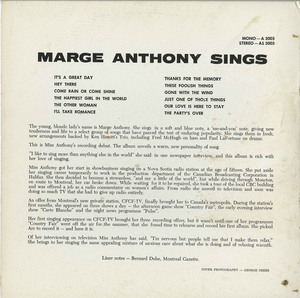 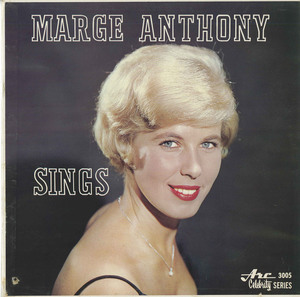 Born in Mill Village, Nova Scotia, on October 10, 1935, Marge Anthony made her entry into broadcasting 13 years later, singing and tap-dancing on radio station CKBW Bridgewater, on a program that also included a very young Donald Sutherland.

The Bridgewater experience led to a job with CBC-TV in Halifax where Marge worked as a script assistant, commentator and singer. Then, on to Moncton and Fred Lynds' CKCW, where she was on both radio and TV - as a commentator on women's affairs and giving weather reports and forecasts.

In 1959, Marge joined the staff of CKGM in Montreal as a commercial writer, which served as the springboard to her becoming the first woman all-night disc jockey in the city. When CFCF-TV signed on in 1961, Marge made the move to Ogilvie Avenue as a commentator and weather person - the first woman to appear in regular programming on the new station.

1962 found Marge in Los Angeles as Vice-President of Artists Relations of Kragen/Smothers/Fritz Inc., and handling PR for the Smothers Brothers Show on CBS-TV. When the show was canceled following a well-publicized controversy, she spent two years in New York at Bell Records (a division of CBS Records, later Arista), working on the production of albums for many famous recording artists - among them: Tony Orlando and Dawn, Barry Manilow, Melissa Manchester, Nana Mouskouri.

On returning to California, she became the personal manager of Smothers Brothers, handling their university circuit tours and Las Vegas and Lake Tahoe appearances.

In 1978, Marge Anthony returned to Canada to become the first woman Vice-President in Canadian television - Vice-President of Network Relations for the CTV Television Network.

During her 12 years with CTV, Marge became deeply involved in the Canadian TV industry in many ways:

President of the Broadcast Executive Society - the first woman president - and a recipient of the Broadcast Achievement Award;
Served three years on the CRTC's Task Force on Sexual Stereotyping in Broadcasting;
Worked with Izzy Sharp to set up the Terry Fox Annual Run and the CTV Telethon;
Arranged to have toll-free numbers for Child Find on CTV;
Produced for TV broadcast the Cystic Fibrosis Gala Performance in Ottawa, starring Celine Dion, David Foster, Stephanie Powers, Christopher Plummer and others - raising over $1-million;
Produced and directed a one-hour performance at the Museum of Civilization for Queen Elizabeth II on her visit to Canada during the 125th anniversary celebration;
Produced "An Evening with Christopher Plummer" at the Centre Pointe Theatre, Nepean, with proceeds given to World Literacy
In 1984, Marge Anthony was married to The Honourable Mr. Justice Allen M. Linden, who sat in the Federal Court of Canada. In 1990, she retired from the CTV Television Network, and departed Toronto for their home in Ottawa. They later moved to Malibu, California.

In 1997, Marjorie Anthony Linden was inducted into the CAB Broadcast Hall of Fame.