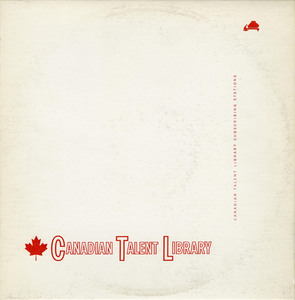 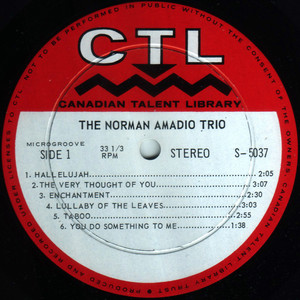 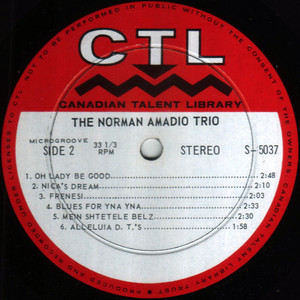 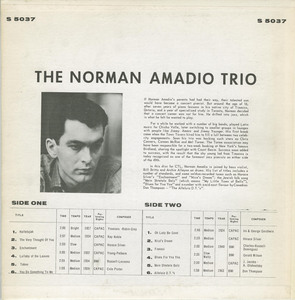 Norm (Albert Norman Benedict) Amadio. Pianist, b Timmins, Ont, of Italian-US parents, 14 Apr 1928. He studied piano for seven years with the Grey Nuns in Timmins and briefly in 1947 with Boris Berlin at the RCMT. Playing jazz under the influence of bebop (Lennie Tristano, Bud Powell, and others), Amadio was a prominent figure in the late 1940s and early 1950s at the House of Hambourg in Toronto and subsequently became one of the city's leading accompanists. After working in the early 1950s in the lounge groups of Jim Younger, Chicho Valle, and Jimmy Amaro, he led the houseband (with the drummer Archie Alleyne and a succession of bassists) at the Town Tavern intermittently until the mid-1960s, accompanying such US jazz artists as Roy Eldridge, Stan Getz, Bill Harris, Coleman Hawkins, Carmen McRae, Mel Tormé, and Lester Young. He returned to jazz periodically through the 1970s and 1980s - eg, at the club Bourbon Street with Chet Baker, Spanky Davis, Buddy Tate, and others.

Amadio also led trios (usually, Bob Price, bass, and Alex Lazaroff, drums) at several Toronto lounges and was the orchestra leader 1987-8 at the Imperial Room of the Royal York Hotel. Concurrent to his club work, he was a member of many studio orchestras, music director for CBC TV's 'Music Hop' 1963-7 and for several CBC pop and country-music specials, and the pianist and an occasional soloist 1977-81 on the syndicated TV series 'Nashville Swing'. His discography includes The Norman Amadio Trio (1963, CTL CTLS-037), with Alleyne and the bassist Bill Britto, and other records as accompanist to Tommy Ambrose, Moe Koffman, and Phyllis Marshall.

Norman Amadio is a highly respected pianist and orchestra leader. His 50 years of professional experience in Toronto and abroad have earned him this status.