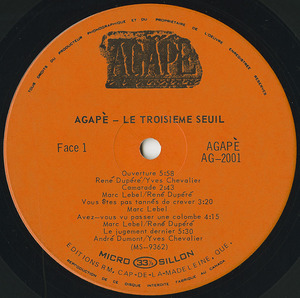 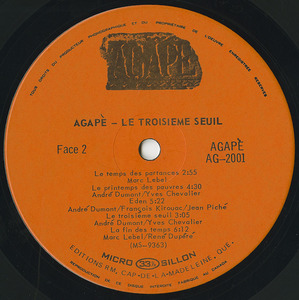 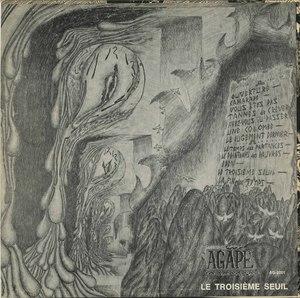 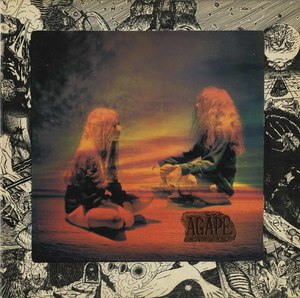 cool album. Seamingly spiritually inspired, highly original and clear music. On first track some bizarre church organ, somewhat like a less heavy Jacula, with flute, drums, bass, some electronic, some collage. Further lots of Québec folk prog. Third track is like first tracks of the first album of Sisa (with typing machine,..). Unrelated to the U.S. band of this name, this was a Canadian progressive band who conjured up a dark organ sound layered with pleasant woodwind, sound effects and weird vocals sung in French on this their sole offering. The stand-out track is the opener Overture, with its dramatic organ introduction and imaginative effects, but there are lots of ideas and diversity here to interest connoisseurs of progressivism. Layers of dark organ in the Jacula vein as well as woodwinds, effects and bizarre vocals. Unique LP came with booklet insert.

What a bizarre UFO this sole privately-released (n 72 ) album from Agape is an eleven-man formation that apparently knew how to capture their sound, because the production is very credible. Graced with a very "pro" artwork, evoking meditation over a sinister background, the back cover in a no-less interesting pagan-time drawing, enhancing the music as well as Bourassa's electronic (and others) effects. . The group consisted of two bassists, two keyboardist, two guitarists, one trumpet blower, André Dumont's vocals a percussionist and a multi-instrumentalist.

Most likely referring to the third stage (Troisième Seuil) of enlightenment, Agape's musical world is a very wild one, starting out like a cross of UFO landing and organ concerto in some wild pagan feast, turning into a mock mass. The singer takes over on harpsichord and sings a light and enlightened folk rock tune, reminiscent of early Floyd, and a little while later of Syd or Dashiell Hedayatt's Obsolète. In the next track, the Hedayatt reminiscence are repeatedly present to the pint that one wonders if it isn't the same artist that moved to Canada. Overall the album, the music wanders from folk rock to psychedelic rock and ahippy-trippy lo-fi

Indeed yet another real unearthed raw gem form La Belle Province where the ideas are so numerous, that had they exploited them better, they would've had enough to make another disc. Nevertheless, Agape's sole album is yet to have seen a legit Cd reissue, something that I hope will be remedied our friends at ProgQuébec. Maybe not essential, but certainly worth a hearing.

A bizarre little record. AGAPE are, I guess, a Christian Rock band. Also, they're a folk band. Most of the time, they're progressive rock band. When they're not folk. Unique, often underlined with psychedelic rock and studio tricks. All that is coloured with various shades of brown; the timbre of the vocalist. He sounds like a baritone without much musical training. And yet, it helps the whole band to be melodic - the layers underneath are spastic and angular.

I don't have a clue what is the story about (I don't speak French), but my impression is anti-war theme, along with philosophy, humans position in the world while being washed with tides of bureaucracy, plus a spiritual message.

Not a bad for a non-speaker, eh? But this band surely produces vivid pictures. You see, the album is full of studio tricks, conversation, sound effects, church organ, typewriter sound, sounds of bombing...making an impressive collage with really distinct mark. And it's not just a pile of acoustic mess - each segment contains it's own development, sported with cross-fading and letting the acoustic guitar to make a thread of a song. There's also flute and piano. And you know what? The more I'm listening to it, the more I like it. I'm rating it with four star without any in-depth explanation - but this sonic hedgehog clicked with me instantly.