Since forming in spring of 2008, the group has operated at a feverish pace. They’ve been heralded by SPIN as an “undiscovered band you need to hear now”. They have been featured in The New Yorker. They have shared the stage with Stars, Chad Vangaalen, Plants & Animals, and Blitzen Trapper. They have performed at Sled Island, Regina Folk Festival, WCMA, CMW, and Ness Creek. They’ve received generous airplay on the CBC and BBC, reaching 3 on the Radio 3 charts and breaking the top 30 on Canadian campus radio. They also won a Radio 3 Bucky award, have been mugged twice, and had their van robbed once.

Library Voices debut EP. Hunting Ghosts & Other Collected Shorts, offers a clear and concise introduction to the collective. The groups song writing objectives are evident, bridging sophisticated pop hooks and melodies with complex harmonies and anthemic sing along choruses. Lyrically the album strays from bubblegum, addressing late night escapades, panic attacks, and the construct of home. The record is also laced with pop culture references, including nods to Tom Waits and Evan Dando, as well as contemporary literature notables Paulo Coehlo, Franz Kafka, Milan Kundera, Nick Flynn, and the late Kurt Vonnegut. Hunting Ghosts & Other Collected Shorts was produced by Library Voices and Orion Paradis at SoulSoundStudios in Regina. The studio was constructed in a century old structure that once a Jewish funeral home. The control both had served as the room where bodies were prepared. An inscription still rests above the entrance that translates to “house of truth and loving kindness.”

“Library Voices give pop a good name! Mixing classic influences (The Kinks, The Zombies) with a more contemporary indie-pop collective aesthetic they have managed to craft a handful of timeless tunes that couldn't exist anytime but right now. While unexpected mid-song disintegrations and perfectly imperfect gang vocals add a nice seasoning to their mix, it's their ability to never lose sight of the song that makes this so vital.” Sled Island Festival 08 (Calgary)

"Library Voices—ten members strong—may well appeal to indie music fans with a taste for the lighthearted, and, of course, hip bookworms who can appreciate the group’s eclectic assortment of literary shout-outs." The New Yorker

“…this EP’s multi-decade mash-up of pop styles feels warm, inviting and unrehearsed. While exuberant bounciness appears to be the ticket for the majority of the EP, the winner may be the most subdued track. The utterly charming “Hunting Ghosts” glides effortlessly on Brian Wilson-esque harmonies, a hushed female vocal and a skittery beat, and is in turns wistful, contemplative and comfortingly cryptic.” Exclaim

“I found myself listening to (Step Off The Map & Float) over and over.” Brookyln Vegan

“The results of these studies (in pop music) are well worth the effort. Hunting Ghosts succeeds in being addictive and continuously compelling.” Prairie Dog – Cover Story (Regina)

Hunting Ghosts (and Other Stories) 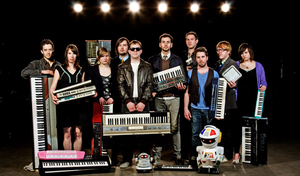 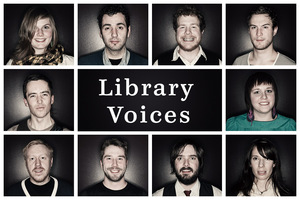 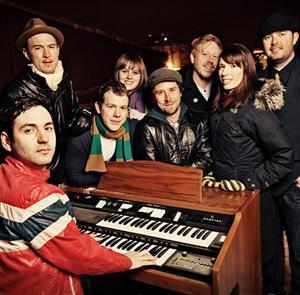