One of the most exciting and energetic Toronto-based Canadian musicians ... past, present and future.

...in 2012, Paul James received 'The Maple Blues (Lifetime Achievement Award for Blues Music in Canada), and at the 'Firehall Reunion' in London, Paul received the first, ' Jimmy Lewis Memorial, Lifetime in the Blues Award.

Paul James is a Canadian cultural icon. A veteran entertainer, this player has seen all that this crazy music business has to offer. His talents as a guitarist, vocalist, band leader, stage acrobatic, and songwriter have allowed James to produce the music he loves for over three decades.

What Do The Critics Say:
"He's generally acknowledged as one of Canada's finest R&B guitarists and has played with the greats of the genre. Bo Diddley, John Hammond, Lightnin' Hopkins, he's burned up riffs with them all. When the inimitable Willy Deville was putting together a band for his '83 European tour, he scoured North America for the most authentic R&B axeman to be found and came up with Paul James."
- Lenny Stoute (Music Express)

"Fighting against the trends toward "commercialized" music over the past few years, the Toronto musician has hung onto his ideals to become one of the hottest rockabilly sensations in Canada."
- Mark Homes (Acton)

"When a person places music and not fame, at the center of their driving passion, never changing directions but keeping true to their conviction, this is the mark of a true legend. This is Paul James."
- Karla Ingleton (Musicologist)

"Paul James is an extraordinary singer/guitarist who captures the excitement of 50's rock, and shapes it into a vital sound for the 80's"
- Music Magazine

"Unlike most of the revivalist, James plays revved up rock like it had never goine out of vogue, creating originals as fresh in 1986 as those first strains out of Sam Phillips Sun Studios 30 years ago."
- Sandy MacDonald (Halifax Weekend Look)

"He has all the tools for stardom."
- Peter Goddard (Toronto Star)

"For fans of early rock 'n roll, who like honky tonk piano and a touch of the blues, the first album from Toronto-based Paul James Band represents the best of its kind so far this year."
- Peter Martin (RPM)

"Feeling jaded with the new-fangled synthetic and synthesized rock but tired of the golden mouldy oldies? Toronto-based Paul James Band is the answer. The music and lyrics are mostly brand new, but the rhythm-and-blues musical style is back in the middle 50's when rock was an infant crying for recognition."
- Paul Bennett (Victoria B.C. Times)

"A testament to James' unbounded good humor, his enthusiasm for roots rock and to his command of the slide guitar - Paul's album Almost Crazy works."
- Greg Quill (Toronto Star)

"The Rock of ages stands firm in Paul. Paul James is a keeper of the flame, one of the town's most steadfast guardians of the rock of ages."
- Val Cleary (Toronto Star)

"Paul James has recently released the album "Almost Crazy". It's a set that proves two things, initially, it shows that there's still room in the major dominated market for an independent label and secondly it proves Paul James has the talent to break big."
- Barry Sweeney (Edmonton)

Sometimes it does pay to play the clown. Just ask Toronto bluesman Paul James. Way back when, in 1986, James was hamming it up in his trademark style at a Nag's Head North gig. Wearing a crazy, ruffled, purple tuxedo shirt, James boogied over to the
bar. He was playing with one hand and drinking a beer with the other when, lo and behold, Bob Dylan jumped up right in front of him. Yes, that Bob Dylan. The legendary folk-rock star was impressed. James, a Dylan fan since he "first heard him," thought he was hallucinating. Dylan joined him on stage. "Just introduce me as the hitchhiker from Vancouver," he told James.

A few weeks ago, Dylan returned the favour -- summoning James to a concert at Buffalo's Midland Arena. Near the end of the show, Dylan announced that he had a friend in the audience. Would Paul James care to join him on stage?

"Uh, oh," James recalls saying to himself. "That's me." Together they performed Highway 61 and Like a Rolling Stone, then came back for an encore of Leopard Skin Pillbox Hat and Buddy Holly's Not Fade Away. After the show, Dylan told James he'd like to give him a call when he's recording his next album.

"Well, do it," said James, who's still walking around in a daze after his "dream come true." Kind of makes it hard, one would imagine, to go back to the dingy barroom circuit.

Lost in the Blues 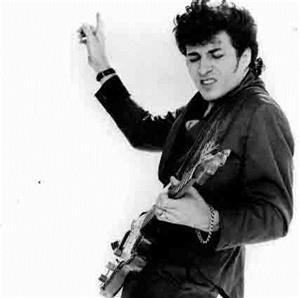