J.B. and the Playboys: Montreal's fab five
Allan Nicholls and Bill Hill look back on their time as kings of the Montreal rock ’n’ roll scene in the mid-1960s.

Talking to Allan Nicholls and Bill Hill more than 50 years after their band J.B. and the Playboys ruled the Montreal rock ’n’ roll scene, one notion often comes up.

“We were entertainers,” Nicholls, the group’s former lead singer, said during a recent visit to Montreal from his home in Burlington, Vt. “We took it seriously. We gave them the Beatles at John Rennie High School.”

“Allan was a terrific showman,” Hill said, reminiscing over the phone during a separate interview. “We entertained ourselves as much as we entertained the audience.”

Bands in their street clothes, staring at their feet and playing long solos, were a few years away. J.B. and the Playboys got their start in a different environment, honing their craft at high school and YMCA dances as well as in live-music proving grounds like the Rawdon Inn and the Rockcliff Inn in Morin Heights, where several sets a night — well into the wee hours — were the norm. And much like the pre-fame Beatles, who had been ordered by fans and club owners in Hamburg, Germany, to “mach schau” (put on a show) during their onstage boot-camp days, J.B. and the Playboys learned to entertain.

Humour, banter with the audience and a few steps were all part of the act, designed to supplement a high-energy repertoire of covers and originals that made the group our city’s answer to the British Invasion in 1964.

“Somewhere along the line, we got good,” Nicholls said.

Both Nicholls and Hill had started by covering Everly Brothers songs. Hill, playing a $20 guitar bought at Eaton’s, used to practise hits by the influential siblings with his neighbour. “That was the end of it for me. It ruined my life from that moment on and I became a guitar player,” Hill said, chuckling.

When Nicholls was about 10, he and his brother, Dave, recorded a version of the Everlys classic Bye Bye Love in a recording booth at Belmont Park. The two occasionally took three buses from St-Laurent to Verdun to sing Everlys favourites for Call Me Uncle, a talent show on radio station CKVL — wearing, as Nicholls recalled, matching T-shirts from Kresge’s.

“We never won. We always came in second,” he said. “But that was my entry to being in front of an audience.”

Dave Nicholls and the Coins grew out of those early radio experiences, with Hill on guitar. At one point, Hill, who had just finished high school, was unable to accompany the Coins on a schedule that included shows outside Quebec. Coincidentally, Allan Nicholls, who was then fronting the Montereys, found his band in need of a guitarist for an important summer show. He approached Hill.

Decades later, Nicholls’s assessment of his bandmate has not diminished. “Bill is the most talented guitarist I’ve ever played with — and I have since played with some of the world’s best. He just had a sound, a way of playing, an attitude on stage. He was just perfect,” Nicholls said.

According to Nicholls, J.B. and the Playboys grew out of that Montereys experience, with guitarist Andy Kaye, bassist Louis Atkins and drummer Doug West completing the lineup. The band’s name was an homage to the hottest men’s magazine of the era, and its fictional leader a reference to the commonly used initials for executive bigwigs lampooned in the publication’s cartoons.

An independently pressed single pairing a cover of the Beatles’ All My Loving with Cheryl, a Buddy Holly-esque Nicholls original, was followed by a bona fide recording contract with RCA Victor’s Canada International arm.

In what now seems an impossibly quaint marketing strategy, the label issued three singles by the group almost simultaneously early in 1965, with picture sleeves — a rare extravagance at the time. One of the 45s, My Delight — a No. 5 hit here — was an irresistible slice of Searchers-styled pop; another, One Love, Your Love, was a persuasive, full-speed garage rocker. Ballads like Chances and Don’t Ask Me to Be True were fresh, tuneful slow-dance cues.

Their new manager, Lionel Pasen, upped the ante on the attire, outfitting them in suits and Beatle boots. “Now we were getting an image. He was basically branding us, even though we didn’t know it,” Nicholls said. “From then on, it was never say die. Whatever high school we were playing at, we would drive up in his Pontiac Parisienne convertible. And we had makeup to make us look a little larger than life.”

Their own songs, mostly written by Nicholls and Kaye, were mixed in with Beatles, Dave Clark Five, Byrds, Wilson Pickett and Smokey Robinson covers. Most shows consisted of two 45-minute sets, Nicholls said.

“We used to like to get people dancing, but we’d prefer to get all their attention,” he said. “Once the records came out, there was nothing cooler than performing and watching people mouth the words to your songs.”

Opening slots for the Beach Boys and the Rolling Stones in 1965 increased their profile — although, ironically, they did not open for the Stones in Montreal. In those days, there were several opening acts before the headliner played for about a half-hour. J.B. and the Playboys considered themselves too far down the bill at the Maurice Richard Arena, and — although accounts seem to differ in the details — they clearly lost a battle of wills backstage when they tried to get a better slot and got cut from the show entirely. They did, however, open for the Stones, who were only breaking at the time, in several other Canadian cities.

The band moved to a bigger market, Toronto, to record their sole, self-titled album, re-recording the singles and adding some new numbers.
“We had exhausted everywhere we could play here,” Hill explained. “As things started to progress and we started to get songs on the charts, we had nowhere to work. We used to play the Bonaventure Curling Club and draw a big crowd, but you can’t play there every week.”

The album stands comfortably beside most LPs from the memorable summer of 1965, which also saw the release of Mr. Tambourine Man by the Byrds, the Beatles’ Help! and the Stones’ breakthrough single, (I Can’t Get No) Satisfaction.

Hill said he considers the album great for its time, although he would like to have done it over again “with all the knowledge we have today — not necessarily the technical knowledge, but just knowing what’s right and what’s wrong.”

“Some of the cuts made it, some didn’t,” Nicholls said. “We were the band other bands used to come and see — and this was in Toronto. Steppenwolf, even Neil Young, came to watch us play. We could not get the energy we had on stage in a recording.”

At the insistence of the group’s manager, Kaye and Atkins were let go and replaced with Jean-Pierre Lauzon and Pete Carson. The firing is a source of regret to both Nicholls and Hill today.
“The original band was the best band,” Nicholls said. “It was never going to be the same.”

Because of perceived confusion with then-popular hitmakers Gary Lewis and the Playboys, a name change to the Jaybees was agreed upon. But sometime in 1967, the band fell apart. There was no decisive moment or cataclysmic event, Nicholls and Hill agreed. Things simply ran out of steam.

The group had a respectable 1968 hit, Poster Man, under the name the Carnival Connection, but the overall musical epilogue is mostly made up of lesser-known, albeit high-quality, bands and projects. Nicholls briefly joined a lineup of Mashmakhan that also featured future April Wine member Brian Greenway, recording the solid rocker Dance a Little Step with them in 1973. He released some solo singles during the same period, including an excellent 1972 version of the Cat Stevens obscurity The Joke.

Hill joined Freedom North, which had regional success in the Montreal area with Doctor Tom in 1970. He later moved into music production, with which he remains involved. “I still have fun doing it, and I have the luxury of picking and choosing what I’d like to do,” he said. Now semi-retired, he said he still plays guitar every day and even bought a pedal steel guitar a couple of years ago.

“We were certainly good friends,” Hill said by way of summing up the J.B. and the Playboys experience. “And those memories? Boy, they’re irreplaceable.”

Nicholls starred in Hair on Broadway from 1969 to 1972. Castmate and friend Keith Carradine later talked Nicholls into seeking work with him on the 1975 film Nashville, directed by Robert Altman. From a part in that film, Nicholls reinvented himself in the cinematic world, gradually moving from acting — he had a role in the George Roy Hill-directed 1977 hockey comedy Slap Shot, which starred Paul Newman — to mostly off-camera work as a writer and director.

Nicholls continued to work regularly with Altman, notably co-writing A Wedding (1978) and A Perfect Couple (1979) with the celebrated director. He was an associate director for Saturday Night Live between 1988 and 1990 and later taught screenwriting, music and film, and directing and producing at Burlington College. He continues to lecture and write music, and performs with the trio the Hokum Brothers throughout New England.

A revealing moment came in 1990, when Nicholls returned to Montreal to appear in Class of ’64, a memorable CFCF-12 broadcast featuring some local ’60s legends rekindling the flame. Al Birmingham and Bob Burgess from the Haunted, Mashmakhan’s Pierre Sénécal, Marty Butler and Tim Hewlings from the Sceptres and the Rabble’s John Pimm were among the other Montreal performers in the all-star band. Nicholls and friends delivered a highly enthusiastic version of My Delight.

And Nicholls’s heart still lies in those moments. “I’ve done so many other things in my life, but the band was always my first love,” he said.
-Bernard Perusse, Special to Montreal Gazette

Cheryl b/w All My Loving

One Love, Your Love b/w I'm Not Satisfied (picture sleeve) 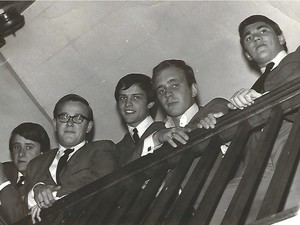 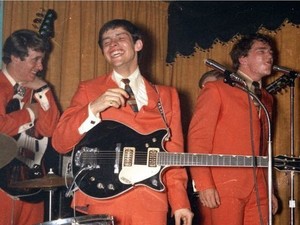 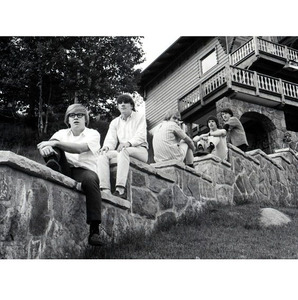