Earl (Carlyle) Heywood. Country singer-songwriter, guitarist, broadcaster, b near Exeter, north of London, Ont, 12 Mar 1917, d Brussels, Ont, 17 Sep 2006. Known as 'Canada's No. 1 Cowboy Singer,' (or 'No. 1 Singing Cowboy'), and one of the leading country musicians in Canadian radio, Heywood learned guitar at age 10. He began his career playing tenor euphonium with the Exeter Brass Band. He served in the army during World War II, and in 1941 became well known for singing his own 'Living in the Army' as the theme of a radio show on CFCO, Chatham, Ont. He joined CKNX, Wingham, Ont, in 1942 and remained with that station (and its later TV and FM affiliates) as a singer and announcer for more than 40 years, performing for almost 20 years on the weekly CKNX Barn Dance. He was the host for 'Serenade Ranch' from 1946-53. He appeared during the 1950s on such CKNX TV programs as 'The Range Riders Show,' 'Rocking Horse Ranch,' and 'Western Roundup' and sang for many years on 'Circle 8 Ranch.' Heywood performed on CBC Radio and television during the 1950s and 1960s, including playing the guitar and singing on 'Holiday Ranch'. Heywood made several appearances in the early 1950s in the US. In 1954 RCA Victor declared a National Earl Heywood Week.

Heywood began recording for RCA Victor in 1949, completing with his Serenade Ranch Gang eighteen 78s (some reissued on the LP Earl Heywood Sings, RCA Camden CAL-2249), including the hits 'Alberta Waltz' and 'Tears of St Anne.' He also recorded LPs for Rodeo and Banff with the Heywood Family (his wife, Martha, and their children Patricia and Grant) and made three albums for Dominion, including the popular Tales of the Donnelly Feud (1969, LPS-21013), for which a corresponding song folio was published by Canadian Music Sales in 1971. (Other folios were published by the same company in 1948 and 1951.) Among his more than 300 songs 'Moonlight on the Manitoulin Island' was a hit for a US group, The Moms and Dads, and the melodies of his 'Alberta Waltz' and 'Algonquin Waltz' were recorded by the fiddler Eleanor Townsend. Heywood's recordings also achieved popularity in Australia.

Heywood was inducted into the Canadian Country Music Hall of Fame in 1989 and is part of the Hank Snow Museum in Nova Scotia. Among his other awards were the Canada 125 medal and the 1999 Barn Dance Historical Society pioneer award.
-TheCanadianEncyclopedia

From the time when he was seven years old in 1924, when his father took him to Exeter to see Doc Kelly’s Medicine Show, Earl Heywood knew he wanted to be an entertainer. The Medicine Show’s singing, dancing, banjo playing and ventriloquist acts to hawk a dubious medical cure enthralled the young Heywood and set him on the trail of becoming Canada’s most famous singing cowboy.

Earl Carlyle Heywood was born on March 12, 1917. He was eldest child of Victor and Lucinda Heywood, a farming family on the 2nd Concession of Usborne Township. He attended the Hurondale School and enjoyed watching his hero, Gene Autry, America’s Singing Cowboy, on the silver screen at the Exeter Leavitt’s theatre.

Another early influence on Heywood was future Canadian Country Hall of Famer and distant cousin Gordie Tapp, who worked as a field hand on his nearby aunt’s farm during the Great Depression. When Tapp needed money after graduating from Lorne Greene’s Radio School, Heywood bought his Martin guitar for $65. In a 1975 interview, Heywood recalled painting his name on the guitar and buying a cowboy hat and suit. They became his trademark look.

In 1935, Heywood played the euphonium in the Exeter Brass Band. He later credited his years with the marching band “with teaching me my real music theory.”

By the late ’30s, Heywood’s name began to appear in the local newspapers performing with his sister Maria in church basements, country fairs and his “favourite” spot, Fred Funk’s Variety Show in Grand Bend.

Heywood joined the army in January 1941. While in training at Chatham, he was asked to play at a base amateur talent contest. After singing a Gene Autry tune, his audience demanded an encore. Heywood complied with a composition of his own. It was called “Living in the Army”, which “brought the house down,” according to Heywood. The colonel loved the satire on army life and declared Heywood the contest winner. The song became the camp’s official marching song.

The song’s popularity landed him his first broadcast on Chatham’s CFCO radio station. It was there that he played a “cleaned up version” of “Living in the Army.” A recording of that tune was later aired on the BBC. Heywood felt “tremendous” because he realized he could write songs that people loved.

In October 1941, just before a live CKNX Barn Dance broadcast in the Hensall town hall, Heywood asked to go on stage. Legendary country crooner Cactus Mac auditioned him on the spot and put him on the air. It was a performance that began an association with the weekly Barn Dance show that lasted until 1963.

On Christmas Eve 1941, Heywood performed on the stage at London’s Princess Theatre. It was there that he was introduced for the first time as “Canada’s Number 1 Singing Cowboy.” His repertoire of country songs received a standing ovation.

On the home front, Earl married Zurich’s Martha Thiel in early 1944. Their marriage produced two children, Patricia (b. 1944) and Grant (b. 1951). As the children got older, they occasionally performed onstage with their mother and father.

In 1946, Heywood’s popularity on the CKNX Barn Dance earned him his own radio show. It was called Serenade Ranch. In a 1991 interview, Heywood told the Huron Focus that it “was the most important moment in my career.”

Serenade Ranch aired for 15 minutes every Thursday until 1953. With his back-up band, the Ranch Boys –consisting of the very talented Ross and Archie Mann, Don Robertson, George Jordan and Ernie King – the show was set on a fictional ranch and opened with the line “the bunk house doors swing wide open” to welcome the friends of “the Old West.”

The show reached a wide audience. It prompted one gullible Oshawa listener to drive to Heywood’s modest home outside of Wingham and ask, “Where’s the Ranch?”

Regrettably, Heywood had to tell him “this is it.”

In 1949, following on the success of Serenade Ranch and a published songbook of Heywood’s popular tunes which sold thousands of copies, Heywood signed a recording contract with Bluebird records, the country division of RCA Victor. Heywood and his band, the Golden Prairie Cowboys, consisting largely of his Ranch Boys, recorded several of Heywood’s popular country songs.

One of Heywood’s best compositions, “Moonlight on the Manitoulin”, written in 1947, is still performed as the island’s unofficial anthem. Its popularity was all the more remarkable because Heywood had never been to Manitoulin Island before he wrote the tune. Earl Heywood and the Golden Prairie Cowboys released their first record in 1949. It received broad airplay across North America.

In 1951, RCA sent Heywood on a singing tour of the eastern United States. On one appearance on a Philadelphia television station in 1953, his back up band was an unknown group known as Bill Haley and the Saddlemen. According to a 1975 interview, Haley – who had just cut a song “Green Tree Boogie” which had sold 8,000 copies – told Heywood that “this is where the young people of today are going.” Within two years, Bill Haley and His Comets went on to rock and roll glory with the smash hits “Rock Around the Clock,” and “Shake, Rattle and Roll.” In 1954, Heywood reached the “pinnacle of his career” when RCA declared National Earl Heywood Week.

By the 1960s, Heywood continued as a regular on the CKNX Barn Dance and its television version Circle 8 Ranch. He played on the stage of Nashville’s Grand Ole Opry and had a 1,000-member Australian fan club.

Yet, despite his success as a singer/song writer, he never forgot his local Huron County roots. Heywood continued to play with his Barn Dance Gang at the local dance pavilions, retirement homes, legions, taprooms, fairs, and just about any juke joint in the area.

In 1966, with their children grown, his wife Martha joined him on stage. More than a singing partner, Martha made many of the “dazzling” cowboy outfits that Heywood said made him feel “like a million bucks once you walked onstage.” Heywood, in 2005, declared that he was “forever indebted” to his wife, “for always making sure I am well-dressed on stage” and as a musical collaborator.

When Heywood, in 1969, heard that a movie was to be made on the Donnelly Massacre, he researched the saga through books and old newspaper stories. It was a story of particular interest to Heywood because his childhood farm was located just a few miles from Biddulph Township where the massacre took place. And, undoubtedly, he had heard tales of the Donnelly feud while growing up.

Released in 1970, Heywood’s album Tales of the Donnelly Feud was a collection of 14 songs that told the story of Canadian tragedy. The album sold 35,000 copies in Canada alone.

Heywood later said, “the album did more for me than anything I’ve ever done.”

In 1974, Heywood appeared with Stompin’ Tom Connors on the CBC’s Stompin’ Tom’s Canada to tell the Donnelly Massacre to a national audience.

For Heywood’s contributions to country music, he was inducted into the Canadian Country Music Hall of Fame in 1989. He and Martha continued to entertain well into the 1990s. In 1991, they helped form the Barn Dance Historical Society to preserve the era’s music.

After releasing 10 albums, composing over 350 songs and a successful singing career, Earl Heywood stayed true to his musical roots. He once told an interviewer that “if I were to play rock music, I would starve to death.”

An Introduction to Earl Heywood & Family

Counterfeit Kisses b/w Your Only Ray of Sunshine

Down In The Valley // There`s a New Love 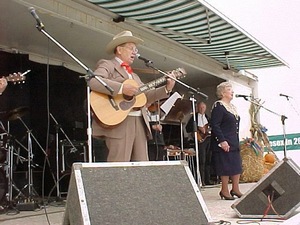 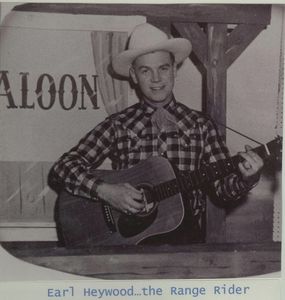 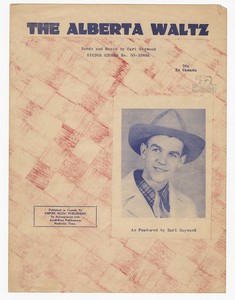 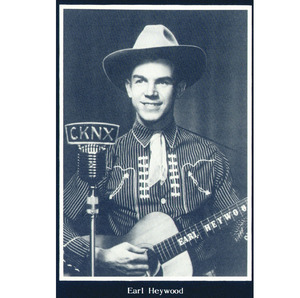