Chief Dan George was born with the names Geswanouth Slahoot (which was anglicized as Dan Slaholt) to a tribal chief on Burrard Indian Reserve No. 3 in North Vancouver. His last name was changed to George when he entered a mission boarding school at the age of 5, where the use of his native language was discouraged, if not forbidden.

After spending much of his early life as a longshoreman, a construction worker, and a school bus driver, Chief Dan George auditioned for the role of Ol' Antoine on "Cariboo Country" (1960), a CBC television series, and was offered the part. On the strength of his performance in the series, and after playing the same part in Smith! (1969) a Disney adaptation of one the show's episodes, based on "Breaking Smith's Quarterhorse" a novella by _Paul St. Pierre_ and starring Glenn Ford, he was asked to play Old Lodge Skins in Little Big Man (1970); this role led to a nomination for Best Supporting Actor in 1970. He continued to appear in a variety of films, and also became an accomplished stage actor.

He became an influential speaker on the rights of the native peoples of North America. He died in 1981 on the same Indian Reserve where he was born.
-Matt Hodson

Trivia
Was chief of the Burrard Band of North Vancouver, British Columbia (aka the Tsleil-Waututh First Nation today), from 1951 to 1963. Although the position is elected, not hereditary, his son is chief today.

Besides television and the movies, was also a successful Canadian stage actor and appeared in The Ectasy of Rita Joe in 1967

Was a successful poet. Wrote two books of poetry, My Heart Soars (1974) and My Spirit Soars (1982). Also recited his famous work, "Lament for Confederation," at Vancouver, British Columbia's 1967 Canadian Centennial celebrations in Empire Stadium; the speech was a stirring - and unexpected - indictment of colonialism's impact on First Nations people and helped galvanize native political activism in British Columbia, and also created support and awareness among non-natives.

Until 1959 (when he was 60 years old), he worked as a longshoreman, logger and itinerant musician.

Has a public school named after him in Toronto, Ontario.

He is commemorated on one of a set of postage stamps (issued in 2008) honoring prominent Canadians in Hollywood. The other stamps feature Marie Dressler, Norma Shearer, and Raymond Burr.

Actor Donald Sutherland quoted from his poem "My Heart Soars" in the the opening ceremonies of the Vancouver 2010: XXI Olympic Winter Games.

Chief Dan George, OC (July 24, 1899 – September 23, 1981) was a chief of the Tsleil-Waututh Nation, a Coast Salish band located on Burrard Inlet in North Vancouver, British Columbia, Canada. He was also an author, poet, and an Academy Award-nominated actor. His best written work was "My Heart Soars".

Born as Geswanouth Slahoot in North Vancouver, his English name was originally Dan Slaholt. The surname was changed to George when he entered a residential school at age 5. He worked at a number of different jobs, including as a longshoreman, construction worker, and school bus driver, and was band chief of the Tsleil-Waututh Nation from 1951–63 (then called the Burrard Indian Band).

In 1960, when he was already 60 years old, he landed his first acting job in a CBC Television series, Cariboo Country, as the character, Ol' Antoine (pron. "Antwine"). He performed the same role in a Walt Disney Studios movie, Smith!, adapted from an episode in this series (based on Breaking Smith's Quarter Horse, a novella by Paul St. Pierre). At age 71, he won several awards for his role in the film Little Big Man. He received a nomination for the Academy Award for Best Supporting Actor. He continued to act in other films, such as Cancel My Reservation, The Outlaw Josey Wales, Harry and Tonto, and Americathon, and on television, including a role in the miniseries Centennial, based on the book by James A. Michener, as well as appearing in a 1973 episode of the original Kung Fu series.

He played the role of Rita Joe's father in George Ryga's stage play, The Ecstasy of Rita Joe, in performances at Vancouver, the National Arts Centre in Ottawa, and Washington, D.C..

During his acting career, he worked to promote better understanding by non-aboriginals of the First Nations people. His soliloquy, Lament for Confederation, an indictment of the appropriation of native territory by white colonialism, was performed at the City of Vancouver's celebration of the Canadian centennial in 1967. This speech is credited with escalating native political activism in Canada and touching off widespread pro-native sentiment among non-natives.

In 1971, George was made an Officer of the Order of Canada. In 2008 Canada Post issued a postage stamp in its "Canadians in Hollywood" series featuring Chief Dan George.

He died in Vancouver in 1981 at the age of 82. He was interred at Burrard Cemetery.

In 1973, George recorded My Blue Heaven with Fireweed, with Indian Prayer on the reverse. An album, Chief Dan George & Fireweed - In Circle was released in 1974 comprising these songs and seven others.

The Ecstasy Of Rita Joe

The Ecstasy Of Rita Joe

Jesus God b/w Nobody Gets My Child 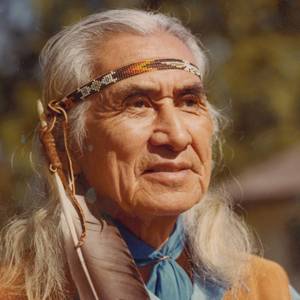 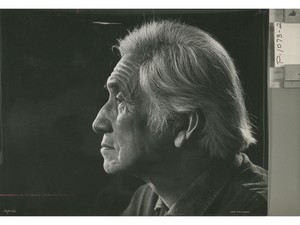 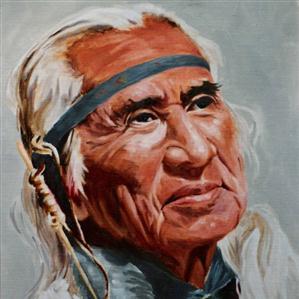