Few things have a catchier beat than the news.

From John Lennon's glint of sarcastic joy in “A Day In The Life,” to Bono's mournful declaration on “Sunday Bloody Sunday,” daily reports of man's tragedies, accomplishments, inhumanities and eccentricities have urged many artists to create everlasting melodic tributes. In the spirit of these classics, Toronto's Enter The Haggis (ETH) created an entire album based on the contents of one day in one newspaper.

The newspaper was the March 30, 2012, issue of The Globe and Mail, and the album that transpired is called The Modest Revolution, a name taken from the front page headline. The date March 30, 2012, was chosen at random but the band was committed after pre-ordering 1500 copies of the issue. Those newspapers were then delivered to their fans with copies of the new album.

Committing to a specific future day in history as the sole inspiration for an album's worth of music was an initial source of anxiety - what if nothing interesting happens? As fate would have it, the focus of that newspaper was The Globe and Mail's analysis of the Canadian federal budget, which had just been passed. Initially, the band was shaken by the dryness of fiscal policy analysis, but true to life, at the heart of every story there was human interest - elements of love and loss.

“You start to see all of the little things that are so inspiring," Buchanan recounts of the writing experience. "Everything from the front page through to the personal stories that fill the obituaries, you realize there are so many stories going on every day. There's so much more than the talking heads on television or the headlines themselves.” Take Copper Leaves, Lewington's lament for the penny, which had been condemned to obsolescence in the federal budget. In the song, an anthropomorphized nickel screams "God, save me from this fate!" after reading of the penny's demise. It's this type of creatively that allowed the band to sculpt passionate prose out of the most mundane articles.

Behind the fiscally-focused front the band found a handful of smaller pieces that turned into some of the bigger songs. Can't Trust the News, the album's first single, was inspired by a 65-year-old woman's decision to find distraction from the traumatic events in her life by climbing the highest peaks on each continent. The article was only 150 words long but it was enough to grab Lewington's attention.

The obituaries spawned two of the twelve songs on the album. One was about the passing of the famous banjo player, Earl Scruggs (Down the Line) and the other about a woman named Cheryl (Footnote). Cheryl's obituary describes her as leaving behind the man of her dreams, her beloved children, and their father. It was those final words that inspired Buchanan to write Footnote about "their father", the man who had apparently been left behind - "And he knows she's somewhere out there chasing hurricanes... putting miles between them every day she's gone."

Even the sports section was fair game. Blackout was written based on an article about concussions in hockey that also dug into The Toronto Maple Leafs for their lousy record that season. "We follow along... we keep chasing the puck... ever whispering someday, we'll drink from the cup" Lewington sings, a sentiment shared by every Leafs fan.

Texturally, the album is more electrified and ramped-up than ETH's 2011 offering, Whitelake. For the first time, Buchanan plays substantial electric guitar, making the songs edgier overall. True to form, the musical influences abound: from Carl Perkins rockabilly on Down the Line, to lush and spacey Radiohead in Hindsight. Instrumentally, Downie and Buchanan paint different sonic strokes on each song, sharing over fifteen instruments between them - fiddle, trumpet, banjo, bells, and bagpipes to name a few. The Modest Revolution's own saga extends beyond its unique inspiration.

ETH set a reasonable goal of raising $20,000 in recording funds through a crowd funding platform called Kickstarter. That modest vision was surpassed in less than 12 hours thanks to the enthusiasm and generosity of the band's dedicated fan base. After a three month campaign, the total sum raised was $66,035. Recorded by longtime friend and producer Zach McNees over the course of a month, Buchanan notes how the tight-knit team that brought The Modest Revolution to life is truly the encapsulation of a “family of people; a microcosmic industry.”

ETH formed in 1996 but the lineup wasn't solidified until 2000, with the addition of Buchanan, Lewington and Abraham. Drummer Bruce McCarthy joined the fold in 2010, bringing a more rootsy approach to the rhythm section. At first the band played mostly pub shows through Ontario, where they became known for their musicianship, energy and inspired performances. As an opening act, they shared stages with Ashley MacIsaac and Spirit of the West, and played the national anthem at the Roger's Centre for the Vanier Cup.

In 2001, ETH was invited to the US for the first time to perform at a festival in Pennsylvania. The demand for the band in the US rose quickly and it wasn't long until the US became the focus of touring. As the group’s fan base expanded and the music evolved, pubs gave way to rock clubs and performing arts centres. In 2004 ETH signed to a US-based management and record label, releasing Casualties of Retail (2004), Soapbox Heroes (2006), and Gutter Anthems (2009). In 2007 the band garnered national attention on ABC's Live with Regis and Kelly and A&E's Breakfast with the Arts. For 2011’s Whitelake the band decided to leave its label and management company, an opportunity that was made possible thanks to its first crowd funding approach.

"It was never really a conscious decision to shy away from touring Canada"says Lewington, so with the Canadian-themed concept for The Modest Revolution, the band is excited to be back on home turf for shows in Ontario and Quebec. 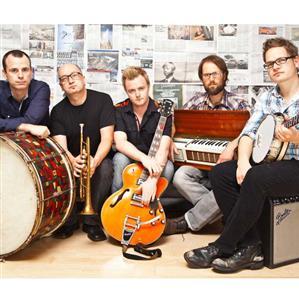