These guys (Crash Kills Five) sounded very punk rock and were strongly compared to the Ramones and even Teenage Head. Some members went onto become Shadowy Men On A Shadowy Planet which was a more garage and surf type sound. All of the group members were excellent musicians and Shadowy Men were made famous when they did the music for the excellent Canadian comedy 'Kids in the Hall.' We in Western Canada still miss Reid Diamond who left us back in 2001. Just like Frankie Venom of Teenage Head both guys entertained us very much back in the days. Reid was a super guy and will always be remembered.

What Do You Do At Night? (EP) (picture sleeve) (re-issue)

What Do You Do At Night? (EP) (picture sleeve) (re-issue) 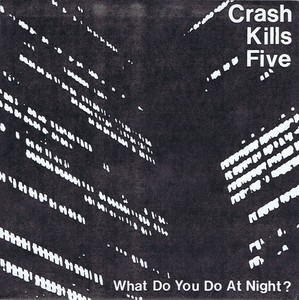