The Characters formed in 1964 under the name the Imperials which was then changed to the Imperial 5 because of the American band by the same name. The band consisted of Pierre Lalonde on drums, Larry Corrigan on bass, Bruce, Rick and me, Gib Rozon on rhythm guitar and vocals. We played around the Ottawa area high schools, community halls, dances, and even a few local bars (even though we were under age at the time). By 1964, we were looking for a different sound and wanted to become more of a recording and travelling band. Pierre wanted to concentrate on getting a degree in music.....which he did... he's a great musician and still teaches to this day.

Rick Cousineau came from a band in '63 called "The No Counts". He was super energetic and he sang background vocals. Randy was playing in a band called 'Thee Group', with Kenny Lauzon (now owner of Lauzon Piano Sales) but lucky for us they were disbanding...hence we asked Randy to join us. Thank God he did! Randy was (IS) one of the best players ever... he is a genius... He was voted best bass player in 1966 by RPM magazine. He also plays guitar, mandolin, dobro, piano, organ, banjo and sings like a blues dude! We then recruited one of my best friends Ray Legault to play drums. His timing and dedication to learn brought the band up to its desired level.

Bruce and I came up the ranks as musicians playing in several bands like the 'Four Teens' (we were all fourteen), and a few other bands...we even had Roddy McCann on sax at one time... Bruce and I got together in 1961 playing parties and anything for exposure, with Larry Corrigan and various drummers.

In 1964 the band became the 'Imperials' with Pierre Lalonde on drums.... then the Imperial 5...with Ray Legault on drums.

We started playing lots of gigs under the guidance of Lenny Alexander (booking agent extraordinaire)... the Ottawa House, The Interprovincial Hotel, The Standish Hall, The Glen Lea (when Playdates were away), the Green DOOR at the old Chaudiere Hotel (to replace the Staccatos/5 Man Electrical Band), high school dances, the Barn (in Aylmer), Corporate gigs in Montreal, etc. Things were moving fast. Sandy Gardiner of the Journal approached us and asked if he could represent us and be our manager... along with Vern Craig of the 5MEB. They then suggested that in order to get more exposure and to make it in the industry, we'd have to record a 45rpm at the very minimum, to which we all agreed... we were gonna be stars, right?

In June, 1965, Sandy made an appointment with RCA Canada in Montreal for a Saturday recording. We showed up with one original 'There's Always Time for Love' (written by Rick Cousineau and Gib Rozon) and a cover tune for the flip side. The original ran 4min, 33 secs. The producers (EXC PRODUCER was Vern Craig, assisted by Les Emerson and Sandy Gardiner) said it was too long! We had to cut it down to less than 3 minutes. We were forced to chop two verses, a chorus, a bridge, intro to chorus and fade, which meant half the meaning of the song was left out. Then they insisted on having 2 originals. I went into the studio and wrote 'Tell Me' in about 5 minutes. Bruce and I sat and went over some lead licks....got Randy and Ray to fill in certain spots and we decided on vocal harmonies, right then and there. 3 takes later, it was done. This is around the time that Sandy said.... "come up with a new name for the band"... The Imperial 5 didn't cut it...so just chatting and fooling around, not sure who said it, someone said “you guys are just a bunch of Characters”... so the name stuck!

'Tell Me' became the Character's Hit Song for 1966 under the Red Leaf label. That’s when we were invited to play on TV for some of those dance TV shows of that era...woohoo! It was fun...none of us had real day jobs and we were looking at making it big.... in R&B (as we were the ONLY band of that time to play R&B music from Ottawa...{I can’t think of any other}) but that era had other plans for us.

In December, 1966, Sandy Gardiner asked us to record another single. At that time, we were opening for popular well known English and Canadian artists acts around the Ottawa and Montreal areas. It was fun! With that in mind, Sandy went to England and got us a single from Pete Townsend of the 'Who' which was recorded originally by Derek Martin and that song was 'Daddy Rolling Stone'. The Who offered not to release the song in the UK for at least 6 months. After a gig at the Green Door, we left at 1:30am in a snow storm and drove to Montreal to the Ramada Inn on Guy St., only to arrive at 7am.... our recording session was booked at RCA Studios for 10am to 5pm... we slept a couple of hours...went to the studio and recorded it amazingly fast and with great sound - the engineer was great... the flip side was a song written by Randy called 'I'll Win You Back'... very bluesy... they advised us not to do it but we said... we're paying for it so that's what is going on. COUSY was amazing on Sax as was Randy on bass, lead vocals and organ. (apparently, Jr. Walker was in the recording studio at the time watching us).

We left that evening to do a show at the Belleville High School Teen Dance. But the drive to Belleville in sleet and snow took us longer than it should have. Needless to say we got to the gig LATE...they gave us hell... didn't pay us... you know the drill LOL. But we continued and thrived well thereafter and got a lot of great gigs still running on the coattails of the first record.

Daddy Rolling Stone was released around March, 1967. CFGO DJ Nelson Davis played our song just after its release and he said "sounds like these guys are singing in a tin can, a barrel or a tunnel". He didn't like the sound because it was not teeny bopper stuff...more R&B flavour. I honestly believe that it was the beginning of the end for 'The Characters'. A few days later we were notified that the Red Leaf label under Stan Klees had gone under. That just devastated us! We were out of pocket money and our “so called savings” were exhausted and spent on recordings and travels. So we agreed to finish our gigs up to end of June and pay off what we owed. We only played weekends from then on. In June 1967 we played our last concert opening for the Young Rascals at the Cornwall Arena. Needless to say, it was awesome playing alongside of these fine musicians and the good times outweighed the bad times! I was so blessed to have experienced that musical adventure with these men... Thanks for the memories!

I was married on April 26, 1968 to my childhood sweetheart.... and my son Al was born in September, 1969. After that, Rick got a job in insurance (and founded his own insurance company too), Ray found a job in graphics design, I went back to the gov't, Randy got a job as a mechanic and Bruce went on to form another band called the 'The Weight'.
-Gib Rozon 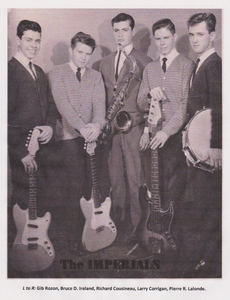 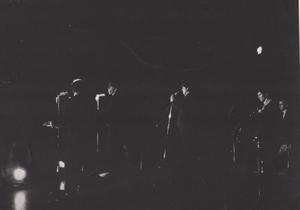 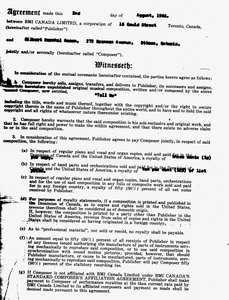 Publishing and licensing copyright contract with BMI Canada for Tell Me 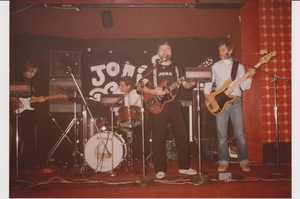 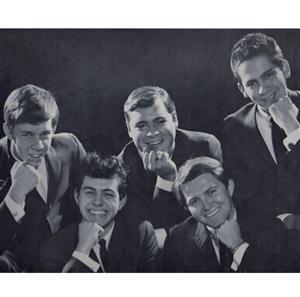