Maxime Morin began playing guitar at age 13, playing mostly heavy metal music. He went on to play in a few punk and metal bands, but by the age of 25 he found himself moving away from metal and gravitating towards techno. The transition was a gradual one: "Totally, I was like 'Dance music is crap!' So it was actually a big liberation, to lose my fear of dance music,” said Morin in a 2004 interview. Morin’s girlfriend at the time took him to a warehouse show and soon he began to attend techno Sundays at Les Foufounes Électriques, a Montreal nightclub better known in the 1980s and 90s for booking punk and alternative rock acts. By 1994 Morin began producing his own dance music and was performing around the Montreal club scene under the names Le Max and Mad Max. By about age 27 he stopped playing guitar altogether.

In the late 1990s, Québécois composer Benoît Charest attended a Mad Max performance; after the show Charest approached Morin with a business proposal; the two men went on to become co-owners of Ben & Max Studios—a company specializing in jingles and soundtracks. Ben & Max Studios became quite successful, however in 2001 Morin sold his share in the company back to Charest in order to continue his own personal musical career. Even after leaving their business partnership, Morin remained in close contact with Charest who was working on the score for the 2003 animated film, Les Triplettes de Belleville. Morin would go on to perform the bass and percussion on the song "Belleville Rendez-vous" and he also performed the song live, along with Charest and vocalist Béatrice (Betty) Bonifassi, at the 76th Academy Awards ceremony—Morin played percussion on a bicycle during the live performance. One of the main protagonists in Les Triplettes de Belleville is an aspiring cyclist who happens to be named Champion; Morin has stated that he was already performing under that name before the film was even created.

Work as DJ ChampionBy 2001 Morin had become frustrated with commercial music work. As part owner of Ben & Max Studios he was making quite a good living producing music for advertising and film, but he also felt “empty.” He decided to leave that world to focus on more personal music. He decided to move in a musical direction where he could combine “the two things that made [him] feel good: Live electronics and guitars...” He also chose to change his performance name from Mad Max to DJ Champion as a way to poke fun at the growing dance music scene and the resulting outbreak of DJs: "Everybody wanted to be a DJ and wanted to know 'Who's the best DJ?' I was like, 'I don't give a damn about all that crap now. I'm DJ Champion.”

The DJ Champion sound was formed by experimenting with the software music sequencer Ableton Live, which is specially designed for live DJ-ing and arranging sounds. He would then layer the digitally produced beats and sounds with guitar loops. During live performances he and his live band would tour as "Champion et ses G Strings" ("Champion and his G Strings"). His live act often consists of four guitarists, one bassist, a vocalist, and Morin working at his laptop and conducting the band. On occasion Morin has also played live drums. 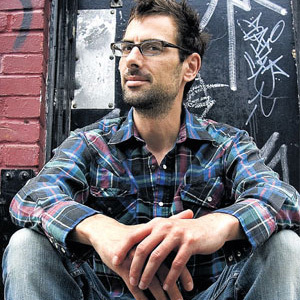