The band was then based out of Kitchener/Waterloo, Ontario Canada. The goal was to write and record their own songs and begin touring those songs while perfecting a live show. In January 1983 they went into Elora sound with Bill Mather and began recording a 3 song EP simply titled Artok. Only 1000 copies were printed, but at last, there was a vinyl disc that represented the songs of that day.

Within two months they made an addition and added keyboards player Berlin Beddessee to round out the live show. In 1984 a video (vhs) was made of one of the shows of that year with ten original songs performed live. Other songs included cover versions of Rush, Pink Floyd and Led Zeppelin. A version of Rush’s song “Subdivisions” can be seen on Artok’s youtube site.

By 1985 Robi had left to Toronto to begin his recording engineering career. (Just google Robi Banerji music credits online and you’ll see the vast credits of his still growing career.) Berlin also left the band and Rob was on the search for new members and his songwriting team.

In 1986 he teamed up with bassist/vocalist Allan Affeldt and began auditioning guitar players. After four guitar players, and extensive touring in Canada, Rob and Al began to write more original songs together. Both Rob and Al would play for a number of live acts together and separately for the next eight years, all the while writing and recording new songs.

Artok began recording some of those songs in 1996-1998. By August of 1998, Al was killed in a car accident along with two other musician passengers, by a drunk driver come down the wrong side of the road on a major highway cutoff just outside of Hamilton Ontario. Rob and many musicians and friends who love Al, were devastated.
Artok was no more.

Robi had moved to Los Angeles California and made a call to Rob in the winter of 1998. Rob left for California, where he now resides, and reformed Artok with Robi and have recorded a cd/dvd called “Above Ground” to be released in 2010.

With a complete band consisting of Rob, Robi and bassist Chris Tristram and long time friend and guitarist Mark Jacobi, Artok is preparing to tour again and release the cd/dvd this year in 2010.

Rob has also written and began sketching the long awaited story of the character Artok for a twelve issue comic book series / graphic novel also to be released this year.
-Rob Taylor 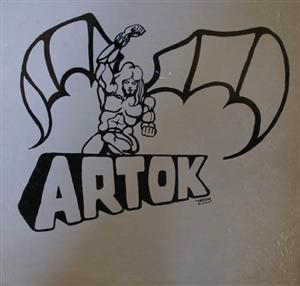