From 1979 and 1981, the Allies played around Toronto's new wave scene at The Edge as well as at the Turning Point, Larry's Hideaway, the Horseshoe Tavern, the Beverly and the Cabana. The band also played in Montreal and Ottawa (joining up with The Bureaucrats - Doug's buddy Joe Frey was lead guitarist) and toured eastern Canada.

The allies' member line-up was changing and with it, their sound was evolving. Rick, the bass player who split, had been replaced by Cecil Nurse in 1980. Cecil and drummer Ed Goodine began experimenting with reggae beats. Then guitarist Nick Mah left the band to return to the world of classical music and without his distinctive styling the band's sound changed radically.

They looked for another guitar player but never found the right person so they carried on as a three piece.

They did another tape that year. The band got linked up with a producer who was a nice guy but it turned out to be a lesson in a poor match between producer and band.

The band was used to doing recordings in two or three takes. This time around it was more like 32 takes. For the band, it was like all of the life was beaten out of the music.

The producer worked very hard for the band in shopping the tape around (we told you he was a nice guy) but there was little or no interest within the Canadian music business for Canadian music at that time.

In the summer of 1981, the band did a short stint as the backing band for a British reggae musician named Horace Faith. That was fun but the band was restless and the Canadian record companies weren't interested in them. Time for another change.

In the fall of 1981 the allies packed up and moved to London, U.K. At that time, it seemed like all anyone in the Canadian music industry was interested in doing was signing English acts and touring them around Canada. The allies decided to check out that scene.

They shopped the tape with No Escape on it and got some interest. One of the interested was Peter Jenner, a famous manager, who's worked with artists like Pink Floyd, the Clash, Ian Drury, and Billy Bragg. He wanted to hear some fresh recordings.

The band found a small studio owned by a heavy metal band called Anvil. They recorded and mixed the tape with "City" on it in one day.

Unfortunately, Jenner couldn't justify putting money into an offshore act when there were so many British bands already needing attention. While this was disappointing, Doug appreciated his attitude as he felt that this was better than what he was seeing in the Canadian music industry where there was little support for music by Canadians at the time.

Doug and drummer Ed Goodine had been living in a one room flat in Finsbury in London over the winter. They had run out of money, and exhausted the two decided to return to Canada in the spring of 1982. Cecil stayed in England with his family. That was the end of the allies.

Back in Toronto, Doug made a bunch of calls to send around the London-recorded tape. To his amazement, his calls were returned. He later found out that Peter Jenner had made some calls on his behalf.

This was also around the time that a big recession hit in 1982. The small record labels, which were most likely to sign the band, were as cash-strapped as Doug.

Doug wound up in the Yukon as an unemployed geologist and musician who made ends meet by renovating houses.
-Doug Webster 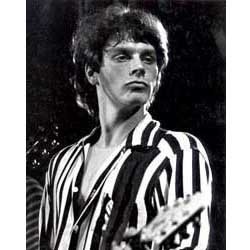