Osiris was formed in the summer of 1986 by drummer Karl Watt, guitarist Steve Roberts and bassist Alan Roberts. The trio had jammed together in the past and Steve kept contacting Karl Asking him to put together a band. The trio got together in 1986 and started writing songs and soon recruited second guitarist Dean Caviglia. Karl had played with Dean in another project and thought Dean a good fit. The band needed a singer and Les Sherart showed up for the audition. They were blown away, the line-up was now complete. It turned out Les and Steve were in high school together at the time but didn’t know each other.

Osiris originally drew its influences from bands such as Iron Maiden, Queensryche, Rush and Dio to mention a few. The band quickly built up a repertoire of original material and was soon playing the Vancouver area. The band went into the studio in early 1987 with engineer Steve Wayne to record their debut demo entitled “Osiris the first edition” The recording was done in a short time as money was tight but the outcome was received very favourably.

It didn’t take long and the band built up a loyal following winning every competition they entered. It was a battle of the bands that landed them a record deal with Notorious Records. The band was garnering industry attention and it seemed as though things were moving very quickly when internal pressures caused Les and Dean to leave the project in 1988.

Osiris was now left to decide what to do. The deal with the record company fell through while the remaining trio auditioned what seemed hundreds of singers until recruiting singer Gary Woods in 1988. Gary brought a new style and musicality to the band and it seemed the direction was changing. It was at this time that an audition tape arrived from a recording engineer named Blair Calibaba.

Blair’s demo rendition of Fates Warnings “Quietus” blew the guys away and in 1989 Blair was soon recruited to regrettably replace Gary on vocals. Gary would still remain close to the band and soon formed his own project that played with Osiris regularly.

Blair brought with him a cerebralism and introspective style that seemed to fit the direction the band was looking for. Thoughtful intelligent lyrics and lyrical themes would dominate the song writing for the next couple of years. It was at this time that Karl discovered a talent for writing and soon wrote lyrics for Witches, By reason of Insanity and The Hand Of Fate. Originally called “The Wall” The name was changed to “The Hand Of Fate”. The Hand of Fate seemed to take on a life of its own and became one of the bands most popular songs, even at 12 minutes in length it was a crowd favourite. Blair thought it would be fun to record the song on his cheap 4-track recorder in his bedroom. The process took a little time and the outcome was so surprisingly good the band decided to release the recording as a demo. The demo was called “The Hand Of Fate” and included the songs Lone Quest, By Reason Of Insanity, Sights Unseen along with The Hand Of Fate.

Osiris became known as the biggest original unsigned band in Vancouver. They played with most major acts that came through Vancouver and could always be relied on to draw a crowd wherever they played.

The band was now being managed and booked through a local Vancouver agency when it became involved in the “Seattle Scene” of the early 90’s. The exposure and experience it received was invaluable. They were playing with many of the upcoming bands of the time while keeping their unique style intact. Appearing on TV and various compilations.

In 1991 Blair made the decision to pursue his recording career and left the band. It was soon after that Karl left to pursue other projects. Steve and Al were now left to pick up the pieces and decide what to do. Steve searched for a new singer and recruited Phil Leite to fill the position. The three were soon writing new material and trying to put together the band. They decided to seek the assistance of Blair and Mushroom Studio and record the demo “Osiris” in 1992. They hired Studio drummer Thomas Deshutter and brought onboard keyboardist Don Krabben for the project. While Don stayed onboard Thomas had other obligations and was soon replaced by drummer Joe Wadden, Joes jazz style did not last long and was replaced by Dons friend Barney Bertagnoli. It seemed the band had the most talented lineup so far and the sky was the limit. The band signed on with TKO entertainment in 1992 (Annihilator, Bif Naked, Annette Ducharme). TKO and Jeff Waters of Annihilator fame took the band into Fiasco Bros studio to record a demo for the upcoming Midem conference in France. The recording was done in record time and engineered by Paul Blake and produced by Jeff Waters and Steve Roberts. The recording received great reviews and it was at this time drummer Barney left the project and Karl rejoined the band. It seemed things were gaining momentum until suddenly Al called it quits in 1993.

This was a major blow. The band tried to recruit a new bass player but it seemed a momentous step backward and Steve decided at that time to dissolve the band.

Karl and Steve reunited a couple times to work on other projects but none came to fruition. There was talk of reuniting but due to other commitments it sadly never happened. Perhaps one day it will.

Sadly in 2010 Karl passed away after a 5 year battle with ALS. It was always Karls dream to see his beloved Osiris in the spotlight and we believe his dream will come true. Since Karls death there has been a rebirth and renewed interest in Osiris. After years of hibernation it seems Osiris is back and garnering fans around the world. We can only hope one day to see the resurrection of Osiris and hear new material from the band. 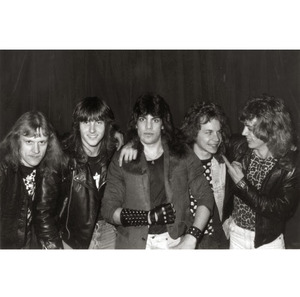