After playing in Ali Hassan (Walk like a Nubian) Kuban's band in Egypt for two years, Sudanese saxophonist-singer Tariq Abubakar settled in Toronto, Canada, in the 1990s. He became one of that country's best-known African musicians, and a video at the end of 1997 put him on all the music TV channels. His band, the Afro-Nubians, threw influences from Zaire/Congo, Egypt, Ethiopia and Ghana into a bubbling blend that had mass appeal as dance music in the West, while referring across the African continent to the sounds of Hugh Masekela, Thomas Mapfumo and Tabu Ley Rochereau. Tariq would set Arabic lyrics to soukous melodies, dissolving Sudan's north-south cultural divide, and ventured to sing earnestly of peace and unity in his rumbling English. During a brief return to Sudan in January 1998, Tariq was killed in a car accident on his way to Khartoum airport. He was 32. 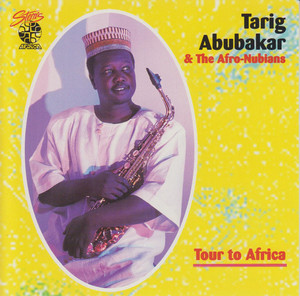