Lorraine McAllister was born in Saskatoon (1922 or 1924 ?), and died in Vancouver in 1984. She sang with the dance bands of Ken Peaker (Saskatoon), Art Hallman (Toronto), and Johnny Holmes (Montreal) which had Oscar Peterson as pianist and Maynard Ferguson as lead trumpet. Lorraine joined the Dal Richards Orchestra in the late 1940s and performed with the band until 1965 at the Panorama Roof of the Hotel Vancouver, marrying Richards in 1951. She starred on many CBC Vancouver radio and TV shows, such as “Burn’s Chuckwagon”, “Some of Those Days” and “Meet Lorraine” (1958-59) and on CBC TV’s “Holiday Ranch” from Toronto. She was the headline performer for the show “Theatre Under The Stars.” Elegant, glamorous, and charming were epithets often used to describe this West-Coast diva. She was later honoured by the BC Entertainment Hall of Fame. 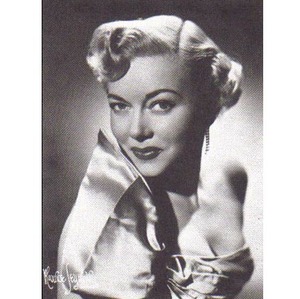