Kiérah is a very impressive and versatile Celtic performer from Western Canada. After 13 years of classical training, Kiérah received one of Canada’s highest marks on her A.R.C.T. performance exam with the Royal Conservatory of Music. However, with an Irish – Scottish heritage, Kiérah’s true passion is performing on the fiddle and composing Celtic and contemporary music, which she has done with equal dedication alongside her classical studies.

Whenever Kiérah performs, her audience is fascinated with her exceptional musical ability, always playing with the clear and precise intonation for which she is known. As comfortable on stage as off, Kiérah is consistently dynamic and polished in her presentation. She possesses a remarkable ability to completely captivate and engage audiences of all ages. Kiérah has performed at numerous music festivals, folk venues, Delta & Shaw TV programs, live on several radio stations across Canada and countless public, private and corporate events.

As the daughter of a stonemason and sister to four brothers in the stone industry, Kiérah has followed their creative and diligent work ethics for herself. Kiérah’s first two CDs – “Irish Madness” and “A Fiddle Affair” received nominations by the Canadian Folk Music Awards in 2008 and 2010. “A Fiddle Affair” also received an award from Highlander Radio for the Best Jigs and Reels 2010. As a prolific composer and due to numerous requests for her music, Kiérah has written and published Western Canada’s first book of all original fiddle tunes – “Kierah’s Collection”. It can be purchased at music stores across Canada as well as online.

Kiérah’s high energy performance style is uniquely her own. Her musicality and outstanding technical ability give her solo performances a fullness all on their own. Kiérah received a near perfect mark on her A.R.C.T. performance exam of Bach’s Chaconne, considered to be one of the most technically and emotionally difficult pieces written for the violin. While performing in Cape Breton she was often compared to Richard Wood. While in Ireland and playing with numerous musicians, she was repeatedly likened to Liz Carroll.

Kiérah looks forward to a career in performing and one day teaching. 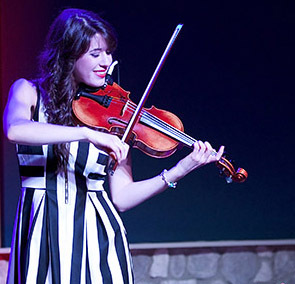