Based in St. John's, Crooked Stovepipe has been playing bluegrass and traditional music around Newfoundland since 1973. They have been regular performers at the Newfoundland & Labrador Folk Festival since 1976, and one of the headline bands at the Mount Pearl Bluegrass and Old-Time Country Music Festival since its inception in 2005. In 2001 they were invited guests at the Blueberry Bluegrass Festival in Stony Plain, Alberta. In 2002 they made their fourth appearance at the Nova Scotia Bluegrass and Old-Time Music Festival. In May, 2003 they were invited to perform at the Atlantic Scene Festival in Ottawa. They performed at the Evangeline Bluegrass Festival, P.E.I. in July, 2006. Their albums, Newfoundland Bluegrass and Pickin' on the Rock, and Just in Case are heard by bluegrass fans around the world. Just in Case was the ECMA Bluegrass Recording of the Year in 2006.

Neil Rosenberg grew up in the western United States and cut his teeth on bluegrass in Indiana in the 1960s, where he helped manage Bill Monroe’s Brown County Jamboree and played in the house band. He even got to play a few times with Bill Monroe--enough to put his name on Blue Grass Boys belt buckle #120. Neil moved to St. John’s in 1968. In 1985 he produced Bluegrass: A History, the definitive book on the roots and development of bluegrass.

Ted Rowe grew up singing and playing Newfoundland and country music in Heart’s Content, Newfoundland, discovering bluegrass in the early ‘70s. He’s been singing lead with the band ever since.

Dave Rowe, our mandolin player, is Ted’s son and no stranger to musical performance or to bluegrass. Dave also plays guitar, bass, and banjo, and lends his high tenor to the bands vocals.

Tom Power, our bass player, got hooked on bluegrass after hearing the soundtrack from 'O Brother, Where Art Thou?' A former member of Bart and the Breadpicks, Tom also plays guitar and banjo, and adds his tenor (and bass!) to the group's vocals.

Pickin' On the Rock

Pickin' On the Rock 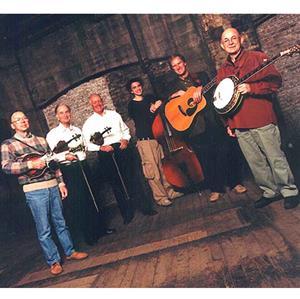