Diehl, Alden (1931-2000)
Blessed with an angelic voice and on the threshold of a life-long career as a tenor soloist in church choirs, it was just natural that Alden would find a way into radio broadcasting through his interest in music. In 1951, he secured a job with CJCA Edmonton as Assistant Librarian, which developed into writing an on-air comedy show and some free-lance acting.

His next radio job was in Prince Albert as Copy Chief for CKBI. From the early 60s onward, Alden's career in the industry criss-crossed the country - Program Director, CFRA Ottawa, Vice-President Programming. CKLW Windsor, General Manager CKY and CITI-FM Winnipeg. and (in 1962) Vice-President and General Manager of CKLG and CFOX-FM, Vancouver, where he continued working until his retirement in 1995.

Aside from broadcasting, Alden was involved with musical groups and live performances. His name is linked with Three Dog Night, Steppenwolf, Alice Cooper, Lighthouse. and Five Man Electrical Band. While in Winnipeg, he wrote and performed a comedic piece entitled Fight on Manitoba, for which he received a Juno Award. Alden also was renowned in several churches across Canada as a tenor soloist. 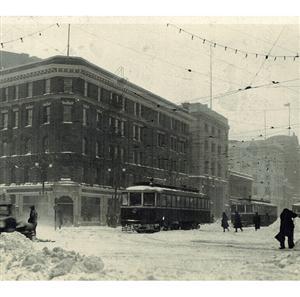